After taking several quilt classes, I was ready to create quilts on my own again. My youngest son, then age 2, was a big fan of both rainbows and hot air balloons. When I saw this fabric at Fabric Depot (my main source of fabric until it closed just last year), I bought a few yards and let it take me on another quilt journey.

I found instructions for the Sunshine and Shadow quilt in a library book about Amish quilts. I decided to make the stripes as rainbows, and spent a good long time choosing my rainbow fabrics. I assembled the six-stripe strata, then cut the triangles and sewed them to the background balloon fabric.  I decided to make the border and binding also reflect a diagonal rainbow. 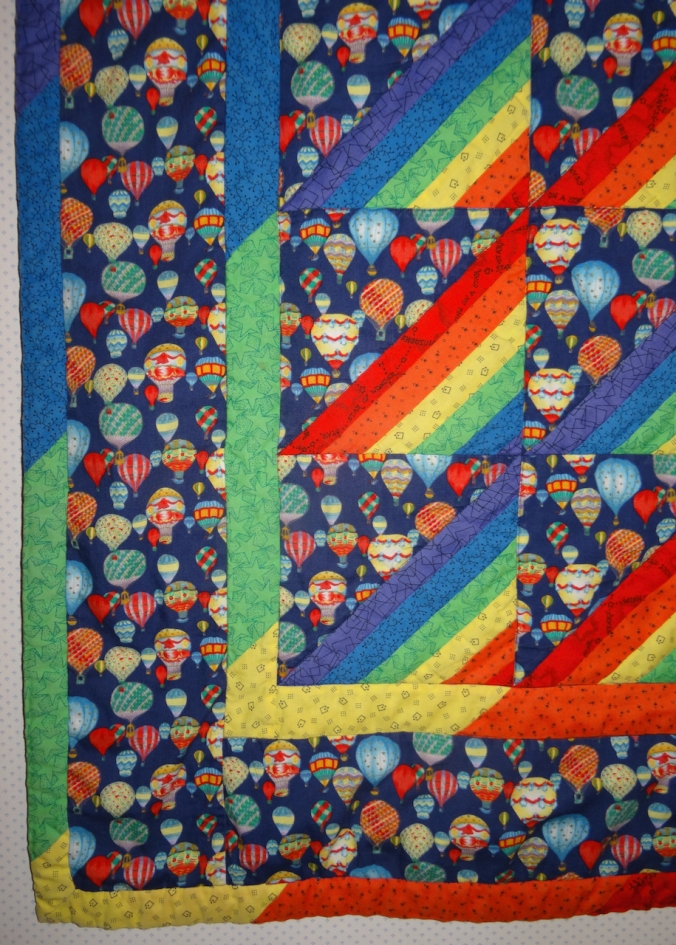 The red star fabric is still a favorite – wish I had more! 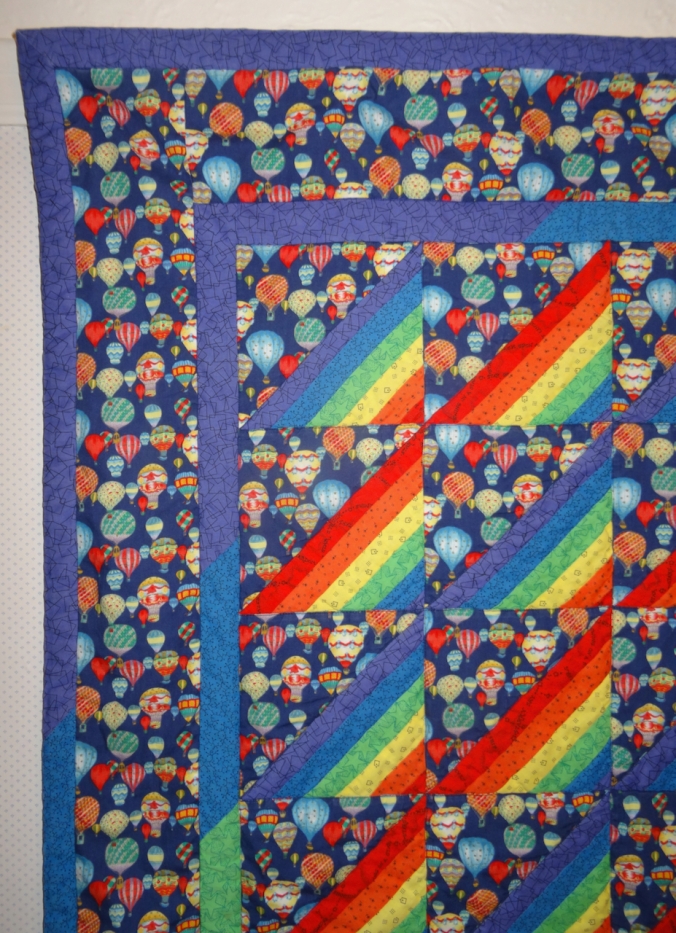 I believe I used a rather thick polyester bat in this quilt, though I can’t remember exactly why just now. Maybe the little one said he wanted a thick quilt? It is quilted in the ditch around the blocks and triangles. My son was happy with the result.

While finishing my Log Cabin quilt, I discovered the world of quilting resources available through library books, TV shows, and local classes. (This was still pre-internet!) In the mid 90’s, I took a series of classes at Daisy Kingdom, a fabric and creative sewing store near me in old town Portland, Oregon. The store was a wonderland of fabric and original design home sewing creations. I learned a variety of quilting skills from local quilt teachers in their upstairs classroom.

Nine Patch: In the Beginning Quilting class, the teacher helped us find a focus fabric and two complementary fabrics, and then make a basic nine patch quilt. I chose this musical print, as my young son was particularly fond of musical instruments. We learned about value as a key to fabric selection and placement, also strip cutting and piecing, sewing accurate seam allowances, and many tips and tricks about assembly, basting, quilting and binding. 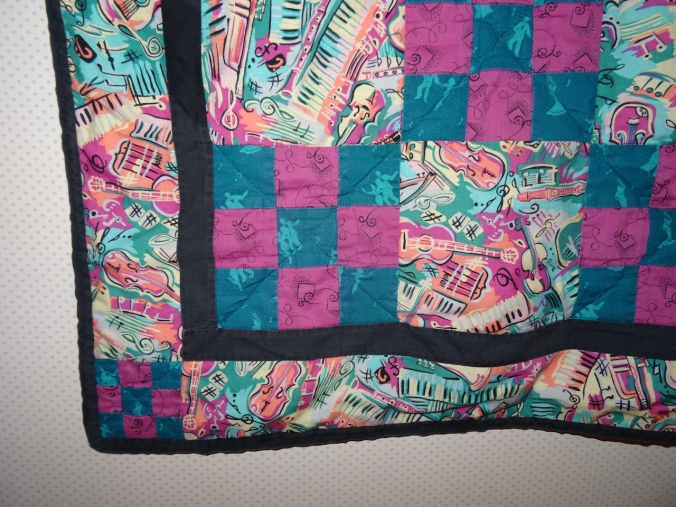 In the Hand Quilting class I learned about pattern transfer, and stitching techniques. 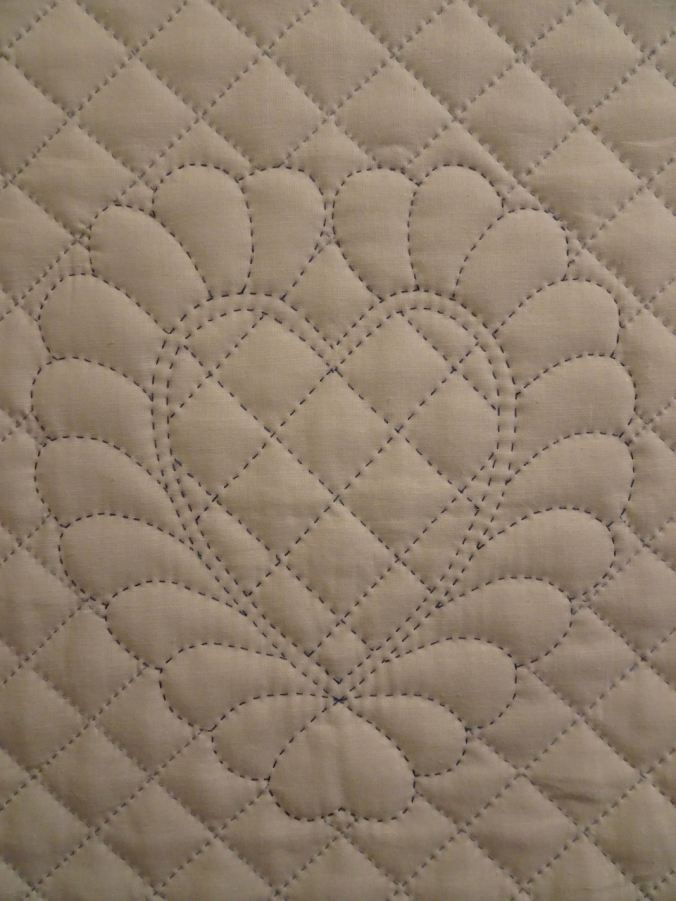 The project for the Appliqué class was this small heart appliqué quilt. I chose to set the hearts with scraps of the same fabrics, and then hand quilted the wall hanging. 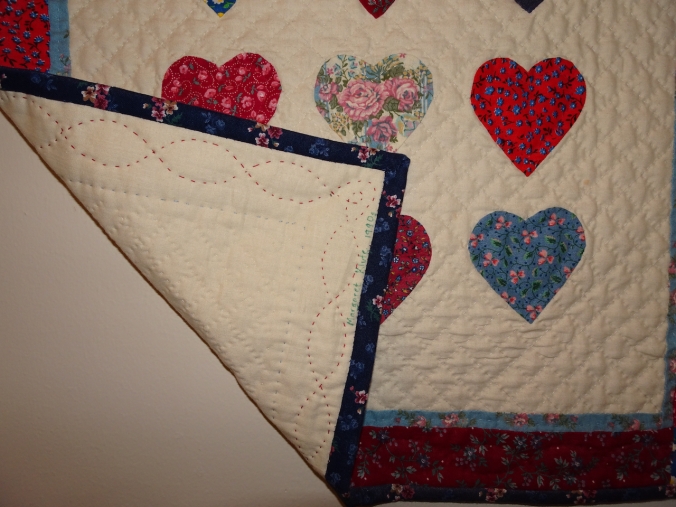 In the Foundation Piecing class I learned to make stitch and flip blocks on tearaway foundation or paper. I turned my little blocks  (two to three inches wide) into Christmas tree ornaments by blanket stitching them together with gold metallic thread.

I learned precision piecing skills while taking the Feathered Star Table Runner class. I also learned later the cruel lesson of not prewashing fabric. The red fabric has bled into the background, despite the use of color catchers in the washing machine. 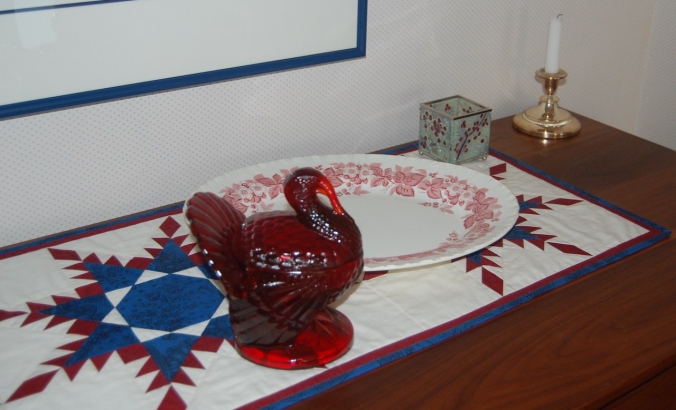 Photo taken before the table runner was washed.

Some of the projects took me years to finish. I don’t remember the teacher’s names, but I know that I was lucky to have such a wonderful resource available to me. I was so excited at the time to be immersing myself in quilting. Although Daisy Kingdom is long since gone as a business, its legacy lives on in many creations by former customers like me.

And just for fun: I still have these items in my stash purchased from Daisy Kingdom way back then that are waiting for inspiration and time. Mary Englebreit and Elinor Peace Bailey were two of the Daisy Kingdom fabric designers. 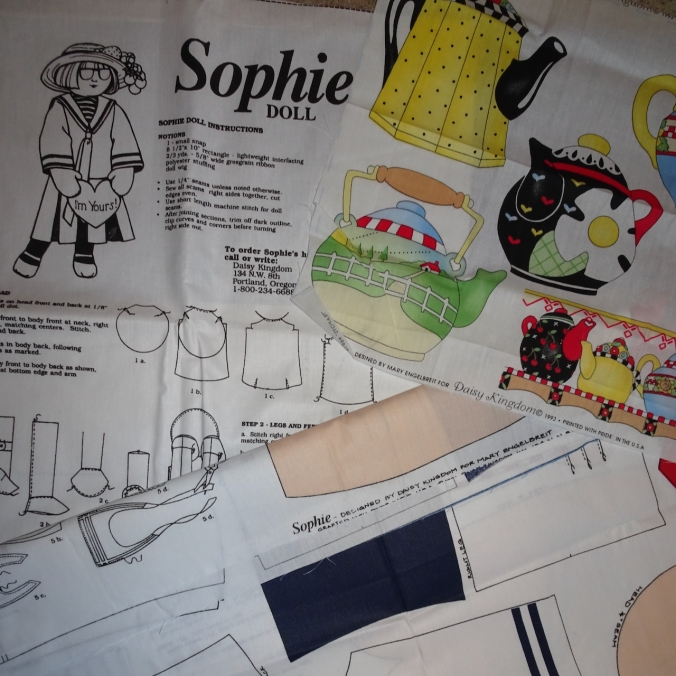 (outro music by Joni Mitchell: “Don’t it always seem to go that you don’t know what you’ve got ’til its gone!”)