We did get the ice storm. Sunday morning, February 14th, the outside world was coated with ice; icicles hanging from the eaves and power lines; drifts of snow were frozen hard as cement and nearly impossible to shovel. We only lost power for about 12 hours – not long enough for lasting harm. 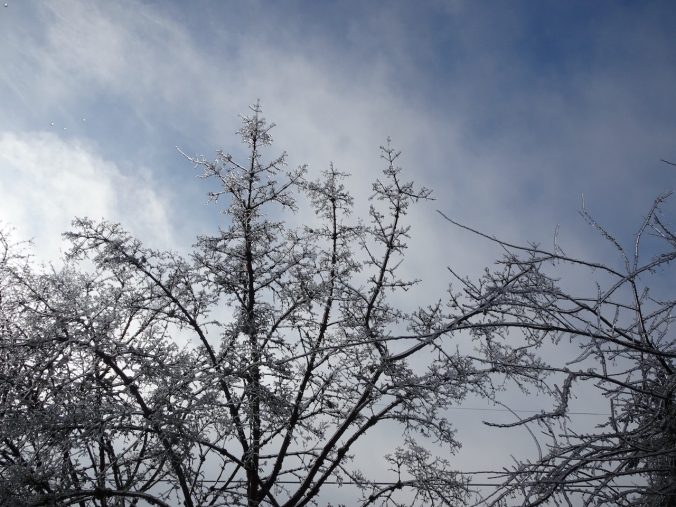 Sunday afternoon the thaw began. Icy chunks and spears crashed down for a couple of hours until the winter glaze was gone, leaving a foot of snow to melt away over the next few days. The crocuses made it, though they seem a little wilted.

I finished and blocked my beautiful Habitation Throw. The pattern is by Helen Stewart, the 24 different mini skeins from my  knitting group advent calendar. I enjoyed the knitting, and I’m already planning another one. 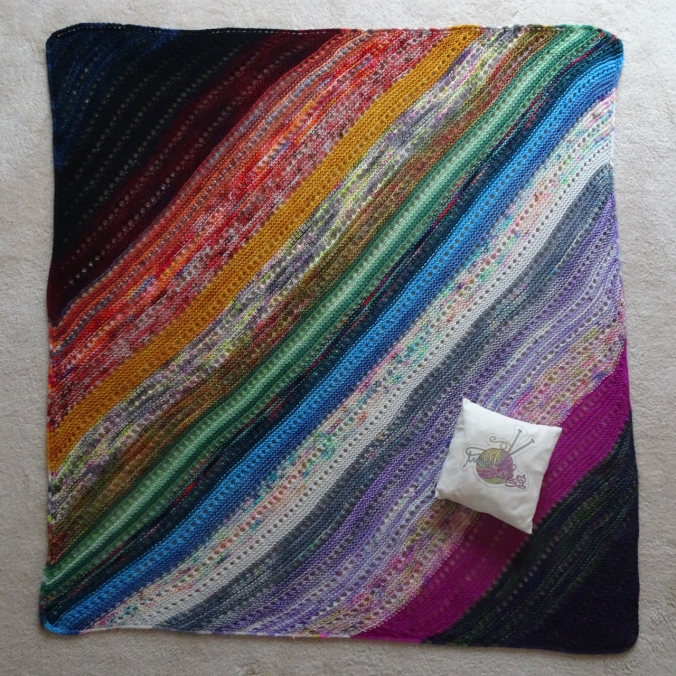 I took an online class about Knitting Marls with Cecelia Campochiaro. We learned about color theory and sequence knitting. I knitted my swatches from six colors of Malabrigo Lace yarn, and now just have to decide which swatches I will use in my class cowl project.

I was cheered on our icy Valentine’s Day by this lovely card and key chain from my sister who is also a Jane Austenophile.

February 14th – When it snows in Portland, our city mostly shuts down. This only happens every few years. We don’t have enough plows to keep side streets clear, and often get sheets and layers of ice with the snow, so best to stay in if possible. This year, we were ready, having practiced pandemic life for eleven months. We have apocalyptic quantities of nonperishable food in our pantry, and can resupply for a week or more with each grocery shop. So no panic, just sit and watch the winter wonderland form, and hope the power stays on.

I took my usual walks around the neighborhood on cross country skis for three days. The streets are flat, with very few cars out. Traffic is mainly dog walkers, families going to the park with sledding accoutrement, other skiers and fat tire bikers. A few skate skiers whizz by, but I am happy to kick glide along, probably slower than I walk, enjoying the novelty of skiing through my snowy neighborhood.

I always notice these opposing statues on Thompson Street: 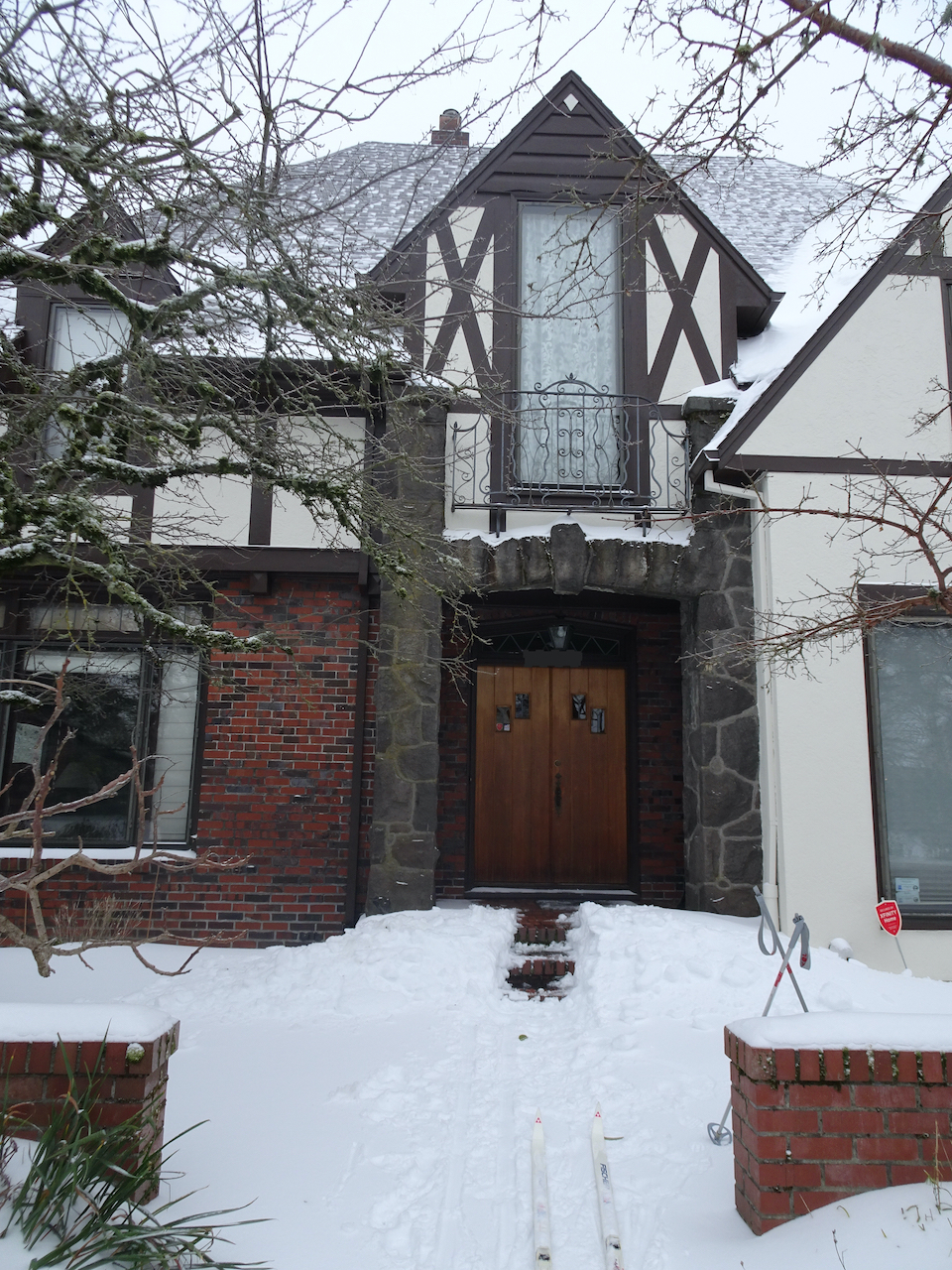 Tonite the ice storm cometh. So far we still have power, but parts of the city have had outages. Eventually we will thaw and the slush will melt away, and I will be back to walking, but I have enjoyed a few days of skiing. Today was a bit icier on the road, unlike the first day when the surface was fluffy. Today I had to focus, keep my weight over my knees, and stay aware of icy tire tracks diverting my ski path. I was reminded of myself, in my early 30’s, when I attended an annual party at a park with a high dive on the swimming pool. Every year I would make my way to the platform and leap off, feet first, trusting the water to break my fall, just to see if I could still bring myself to do it. Today I trusted my knees and balance to keep me upright on an icy road, sliding along on my 30 year old skis. Check.

Sewing: I finally collected 200 pennies! No one uses pennies anymore, yet they are the perfect filling for a set of pattern weights, pattern from an old Elizabeth Hartman blog post. I used some of my Jane Austen fabric. 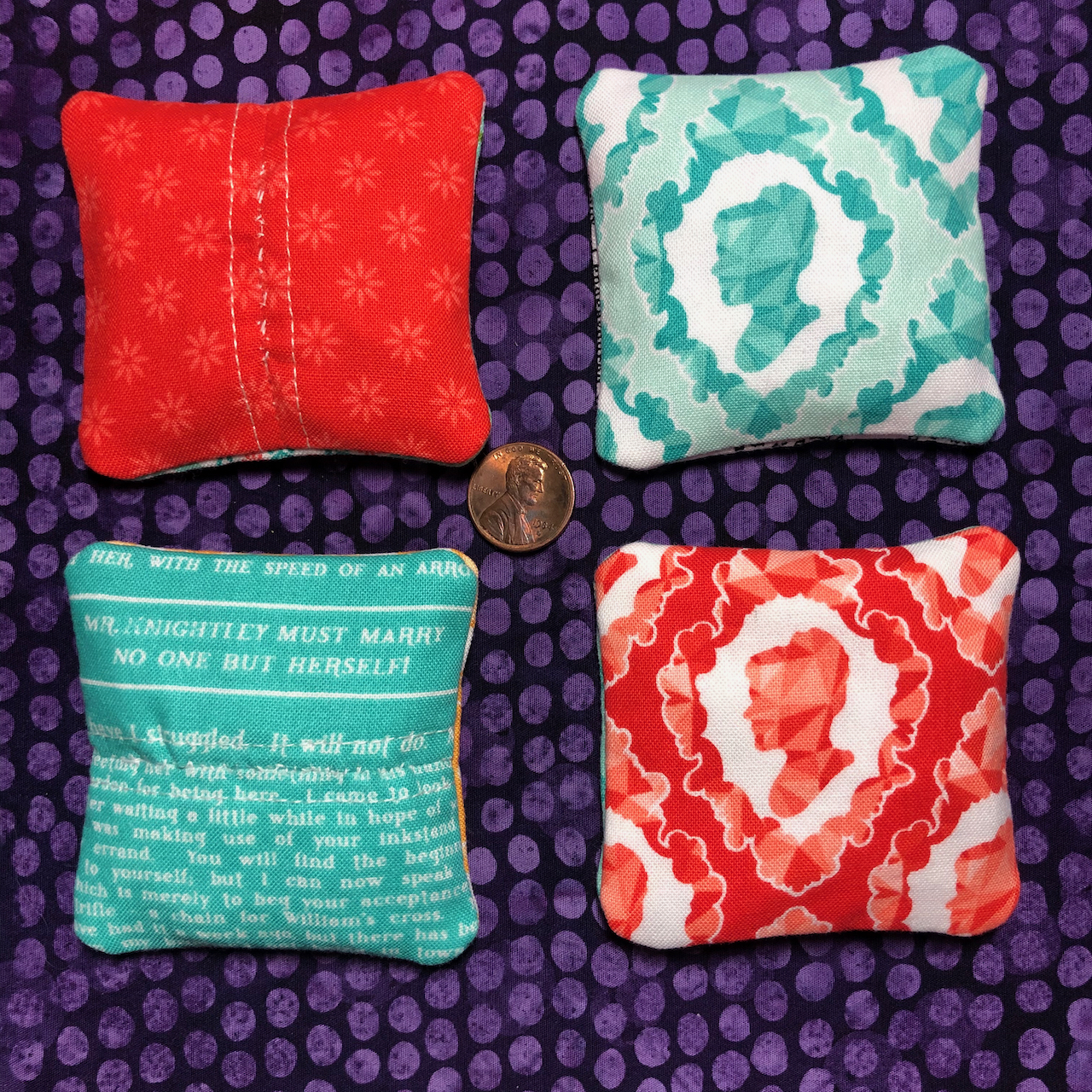 Knitting: I finished my Artists Garden Socks. I have made a goal to knit at least one item per month for the Puddletown Knitting Guild project to supply a woman’s shelter with warm items next winter. I obtained a pile of donated yarn from the guild, and have finished two hats so far, and started a cowl. 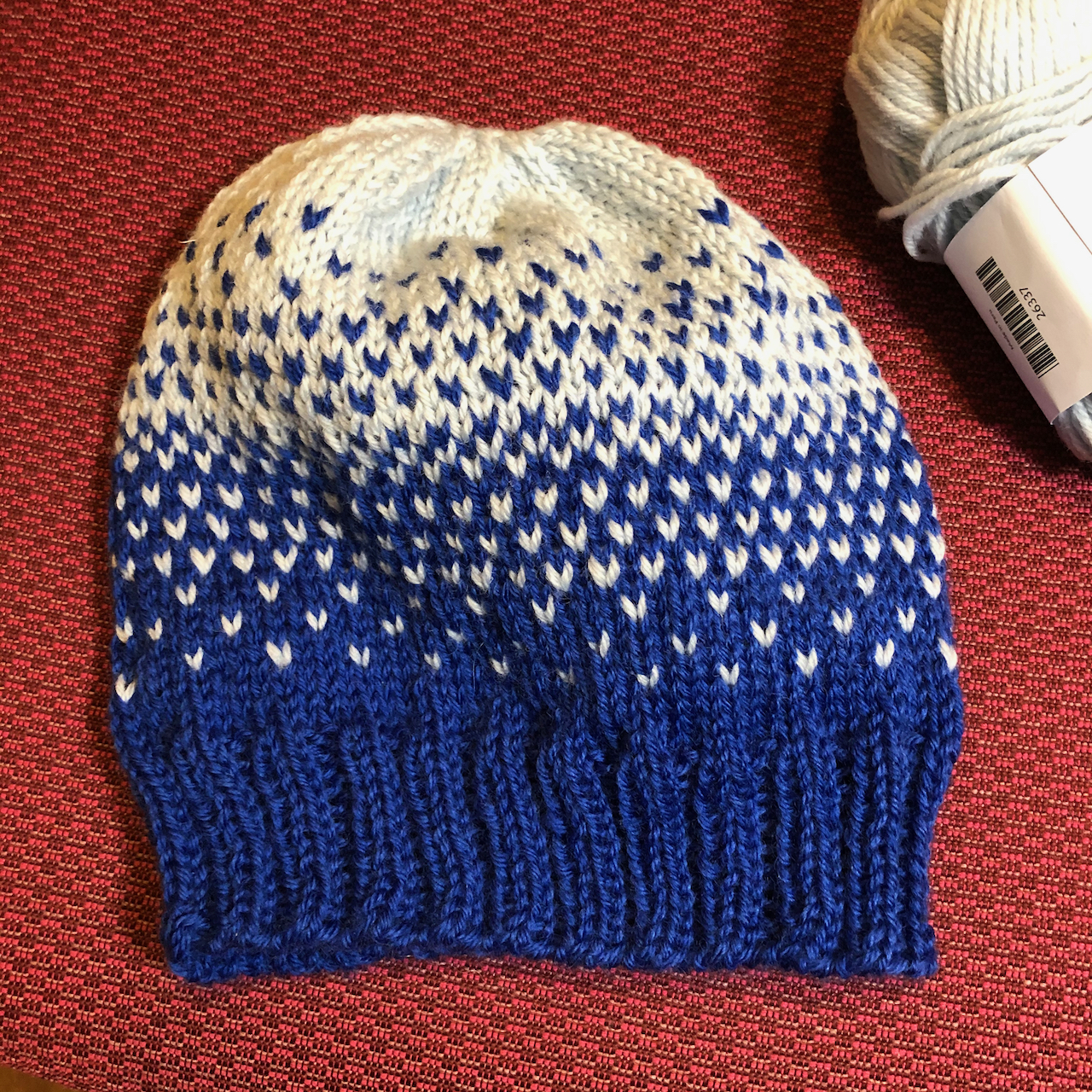 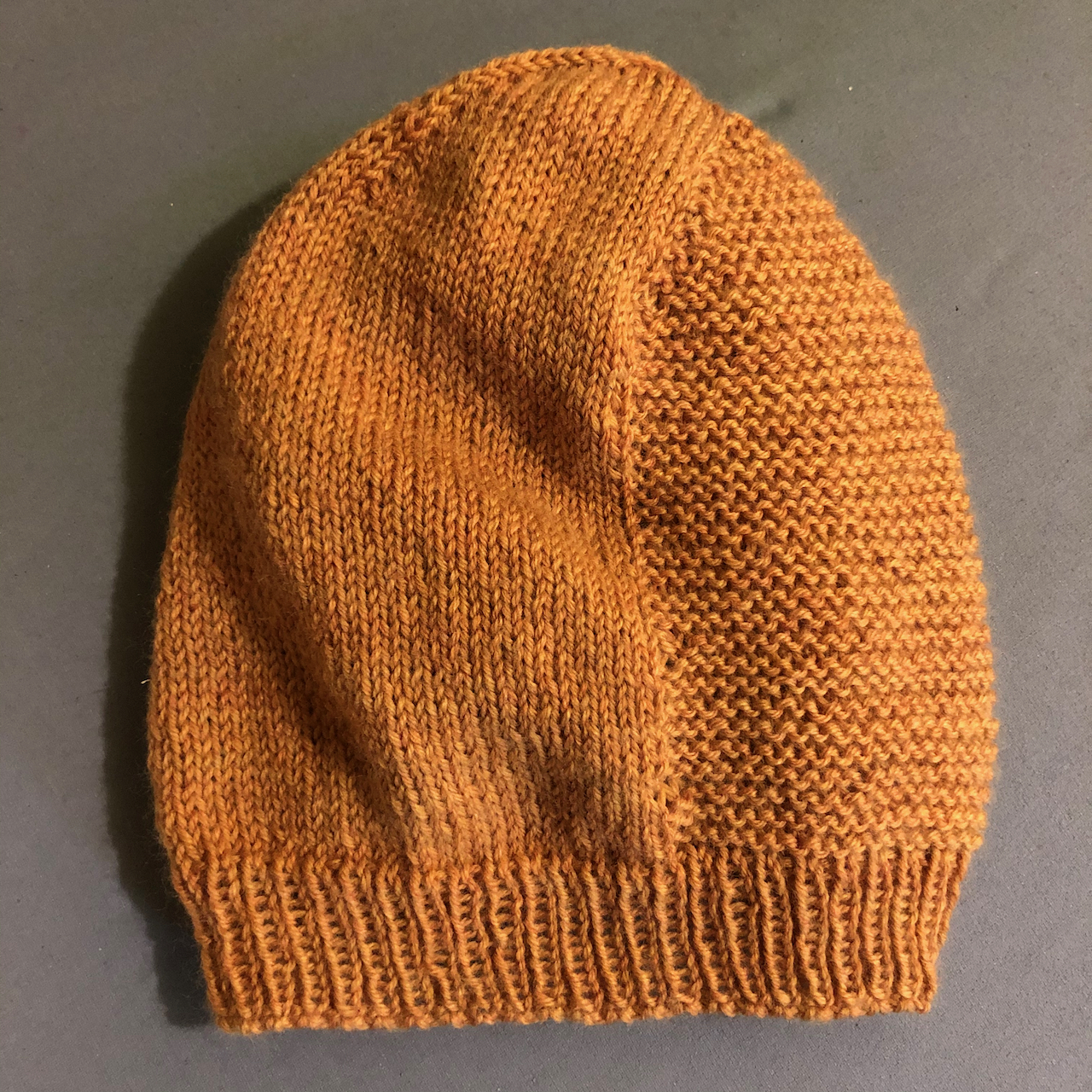 Meanwhile, around the yard and neighborhood, before the snow, I saw crocuses, one daffodil, and a cherry tree. Hopefully they will all survive the freeze we are in now. 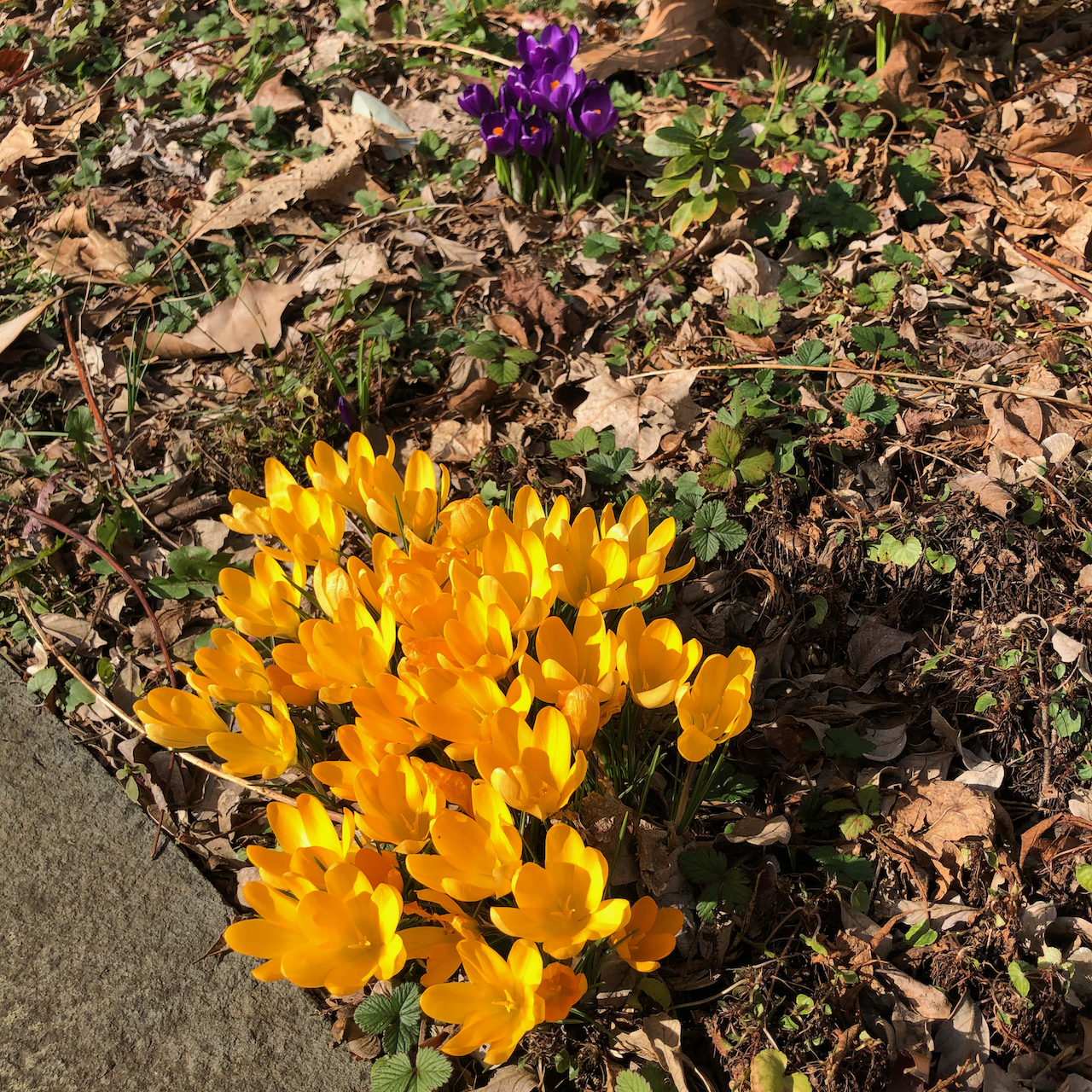 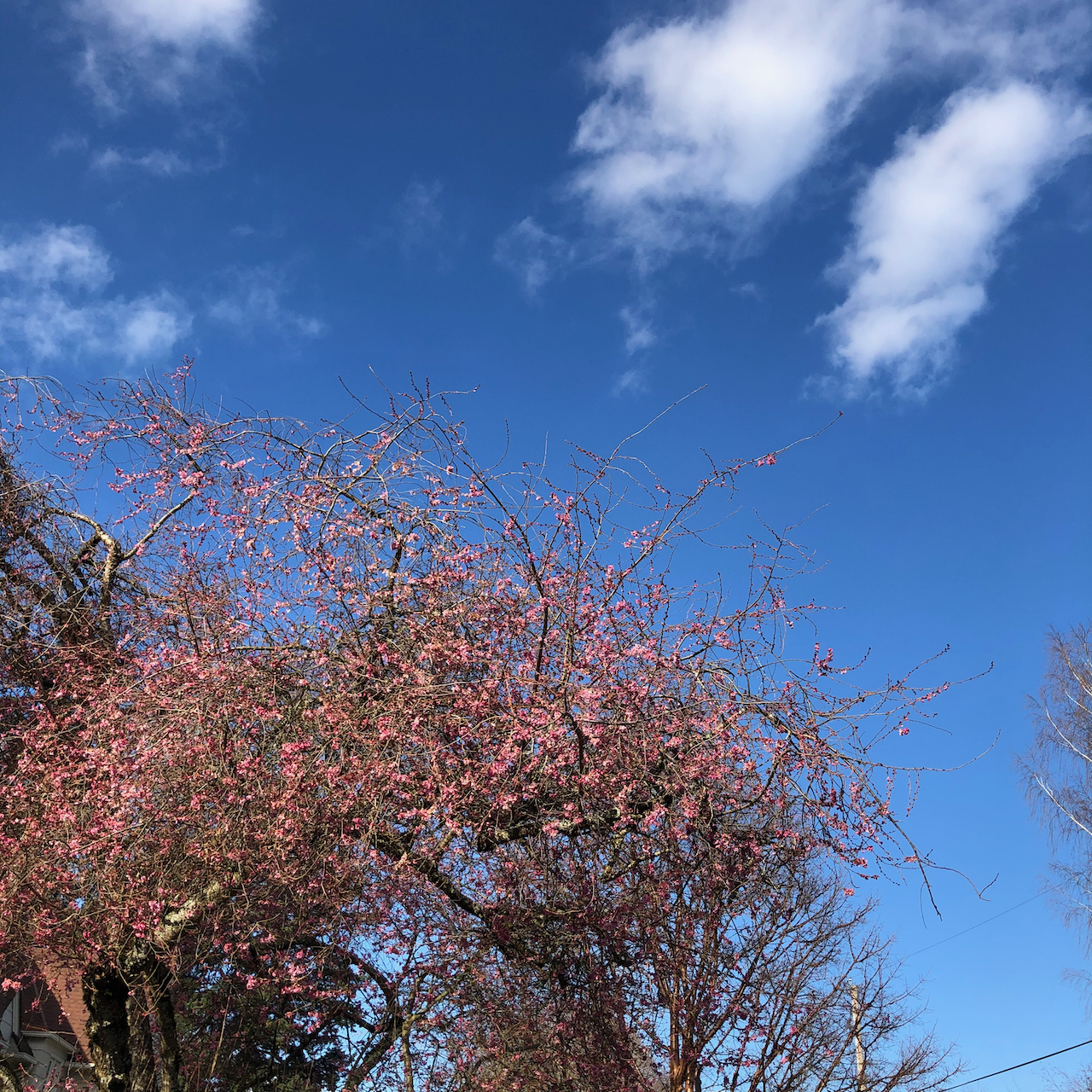 After our day off in Queenstown, we began the second part of our tour by meeting three new tour members, and an additional tour guide, in our hotel restaurant. We drove south and west, from Queenstown to Manapouri, in a steady rain, with two stops along the way.

Our first break was in the town of Garston – a small inland village with a speciality in honey production. We sampled some honey, then resumed our journey. Mountains, clouds, green fields full of sheep, elk and deer whizzed by, through the rain. 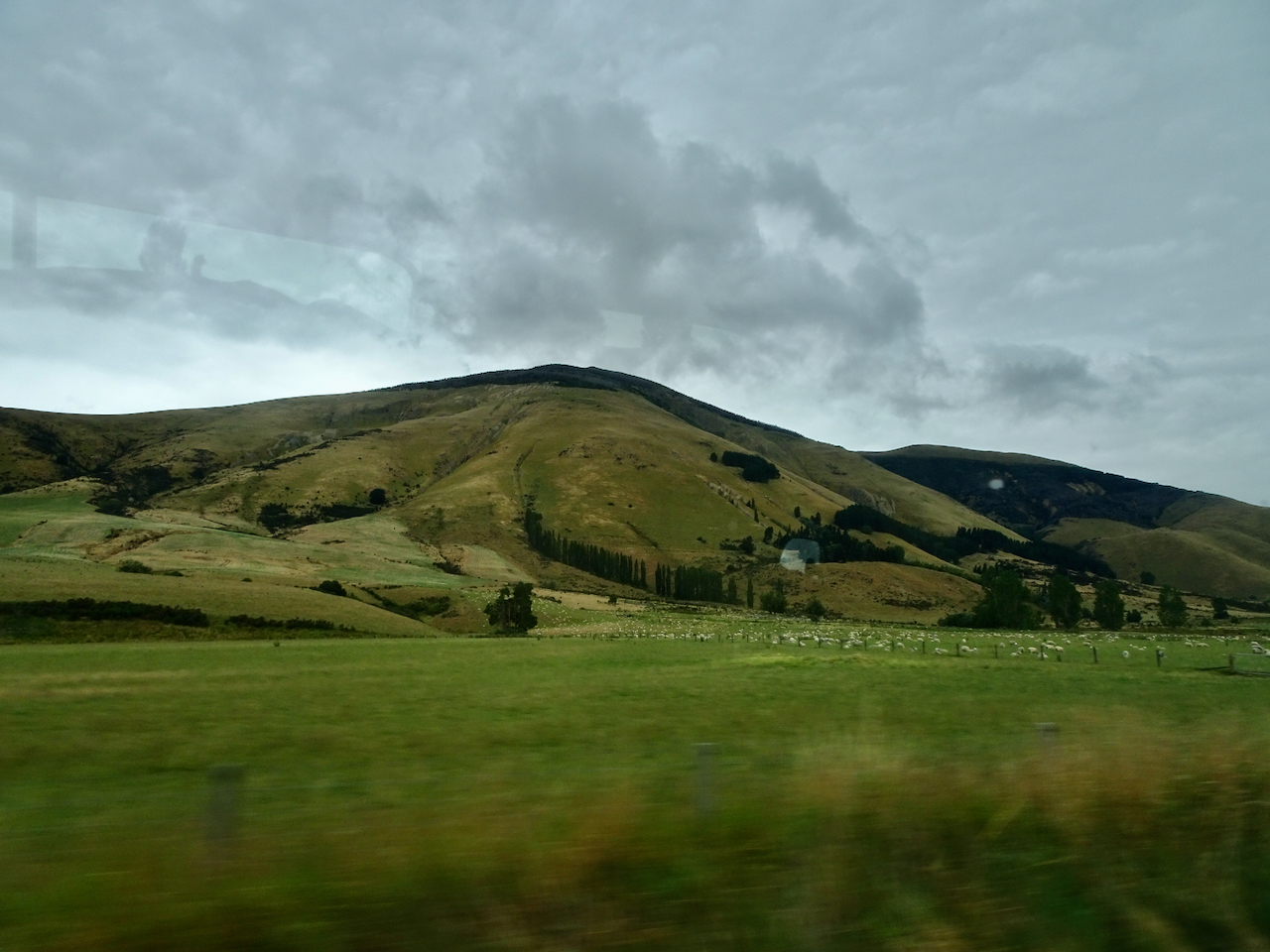 We next took a short leg stretching break at a wilderness reserve that demonstrated the native plant communities that are typical of this cold, mountainous inland area before European settling and agriculture. We took in what we could, but the rain and clouds obscured mountain views and much exploring.

View to the Southern Alps.

Closer view of some of the plants.

Off we went again, this time to our final tour bus destination – Pearl Harbor in Manapouri, where we began our overnight in Doubtful Sound adventure. We said goodbye to one of our guides for the moment, as he was staying with the bus. To get to Doubtful Sound, deep in the mountains of the Southern Alps, one must take a ferry boat across Lake Manapouri, to the far shore.

Next we boarded a bus that took us over the steep, 13 mile long Wilmot Pass Road, then down to Deep Cove Dock at Doubtful Sound. There, we boarded the Fiordland Navigator, our home for the next 24 hours. 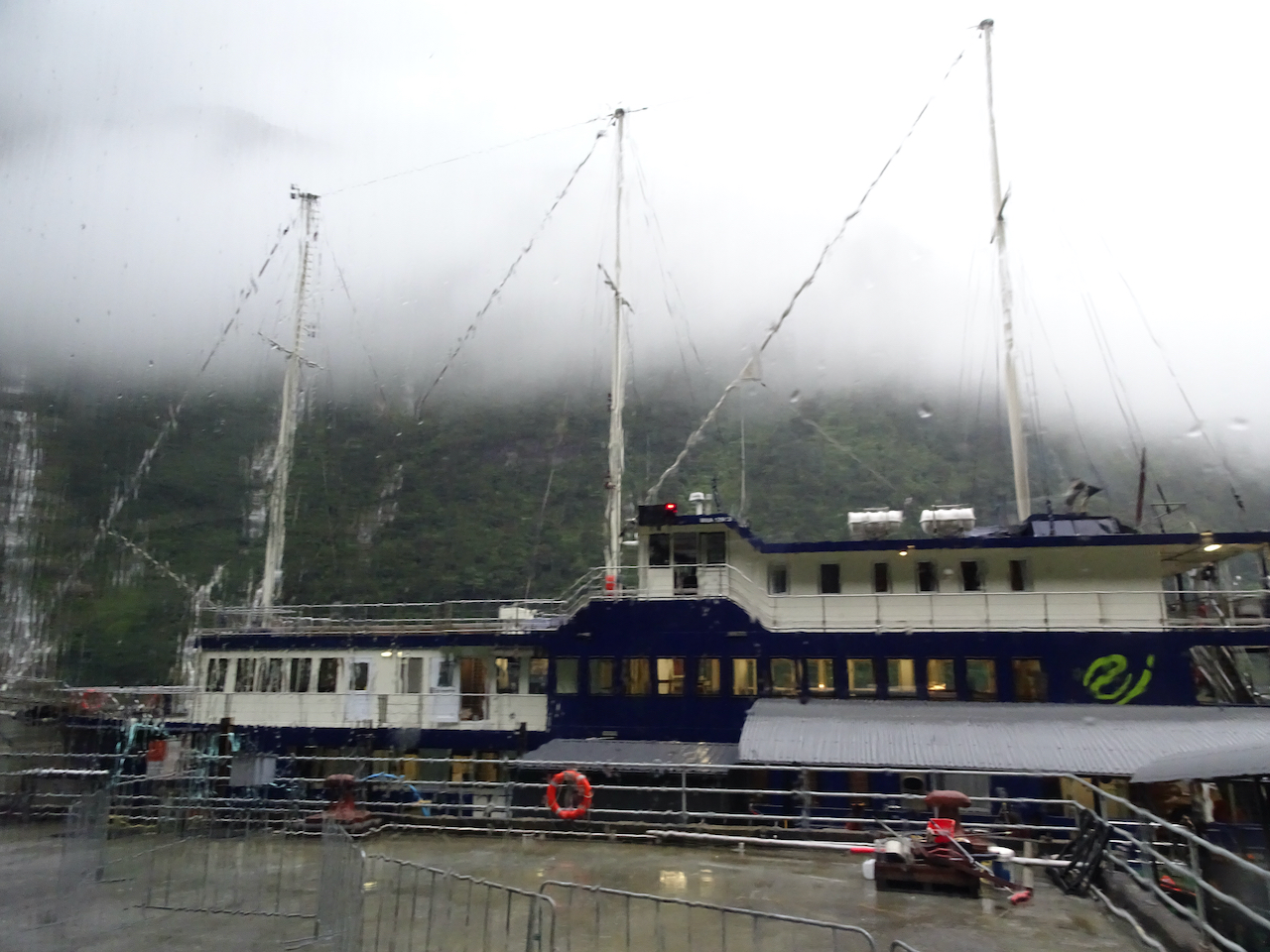 Fiordland Navigator, from the bus window, in the pouring rain.

The Navigator was a very comfortable ship with an experienced, multitasking crew that choreographed our time on board with a well crafted schedule. The 42 passengers were shown into the main cabin/dining salon. We received our safety briefings, and were assigned our sleeping accommodations – for us, a private cabin, but for most, four bed bunk rooms.

Then we were free to explore and wander, and hopefully see all the views, while the naturalist pointed out various features of interest. Steep glaciated gneiss walls rose up on both sides of the fiord, draped in brilliant green foliage, and streaked with tumbling white waterfalls in every direction. Our naturalist told us that they usually see a lot of waterfalls, but because of the steady downpour, we were seeing more than usual, and more volume than usual. We could see fairly well from the large windows in the dining salon and forward viewing cabin, and even from under covered walkways on the lower deck. How lovely it would have been to stand or sit on the upper deck as we passed through the fiord, but the drenching rain made that uncomfortable. We did go out for short forays, and longer moments during rain breaks, but really, it did rain most of the time this first day. We made the best of it, constantly, not always successfully, trying to keep water off camera lenses. We assumed that this much rain was typical. Later, we learned that this was a particularly wet stretch of weather – more so than usual, and that it would affect the next few days of our tour. Our intrepid naturalist spent most of her time out on the deck, narrating the landscape, seemingly unphased by the drenching. 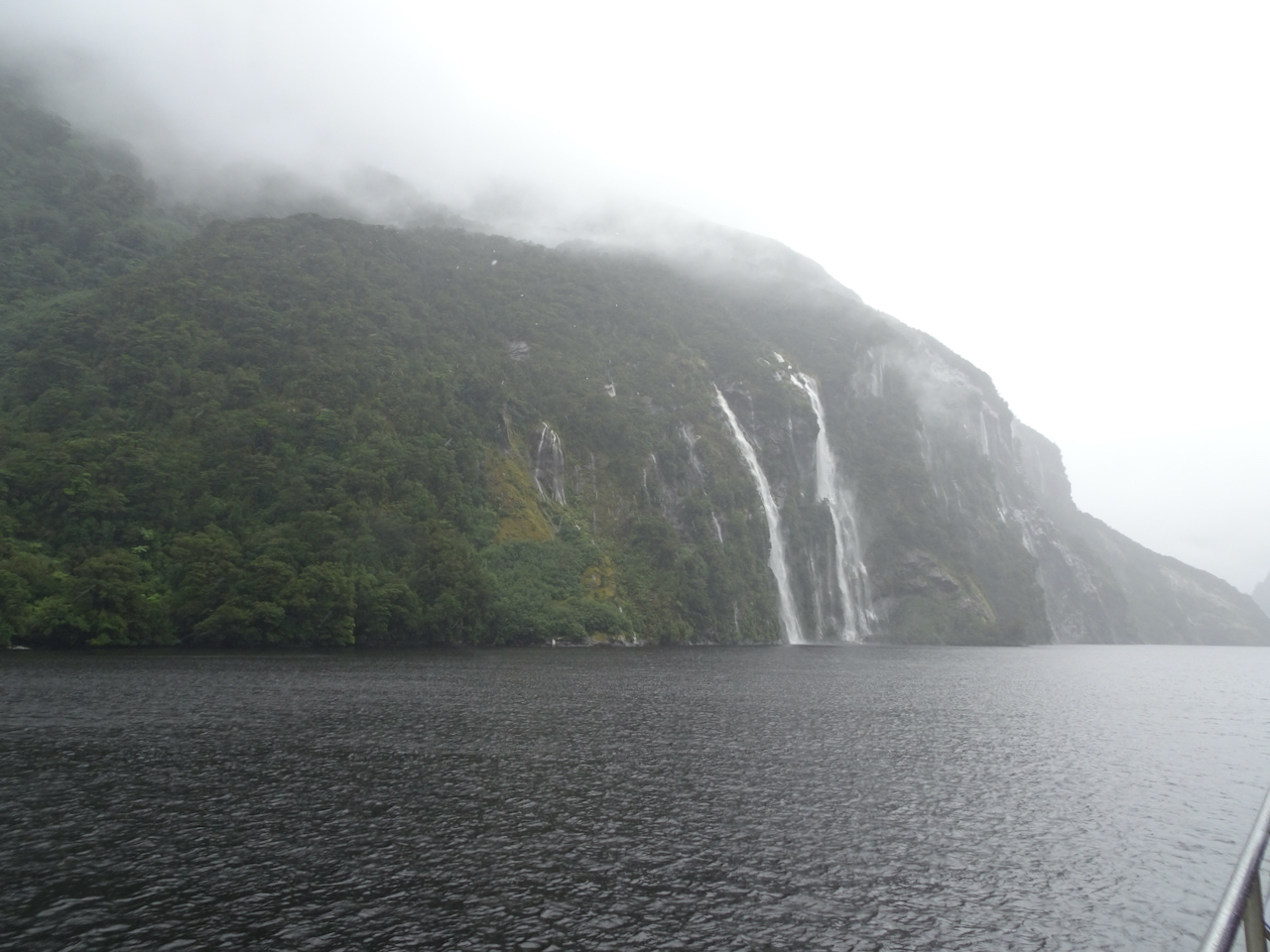 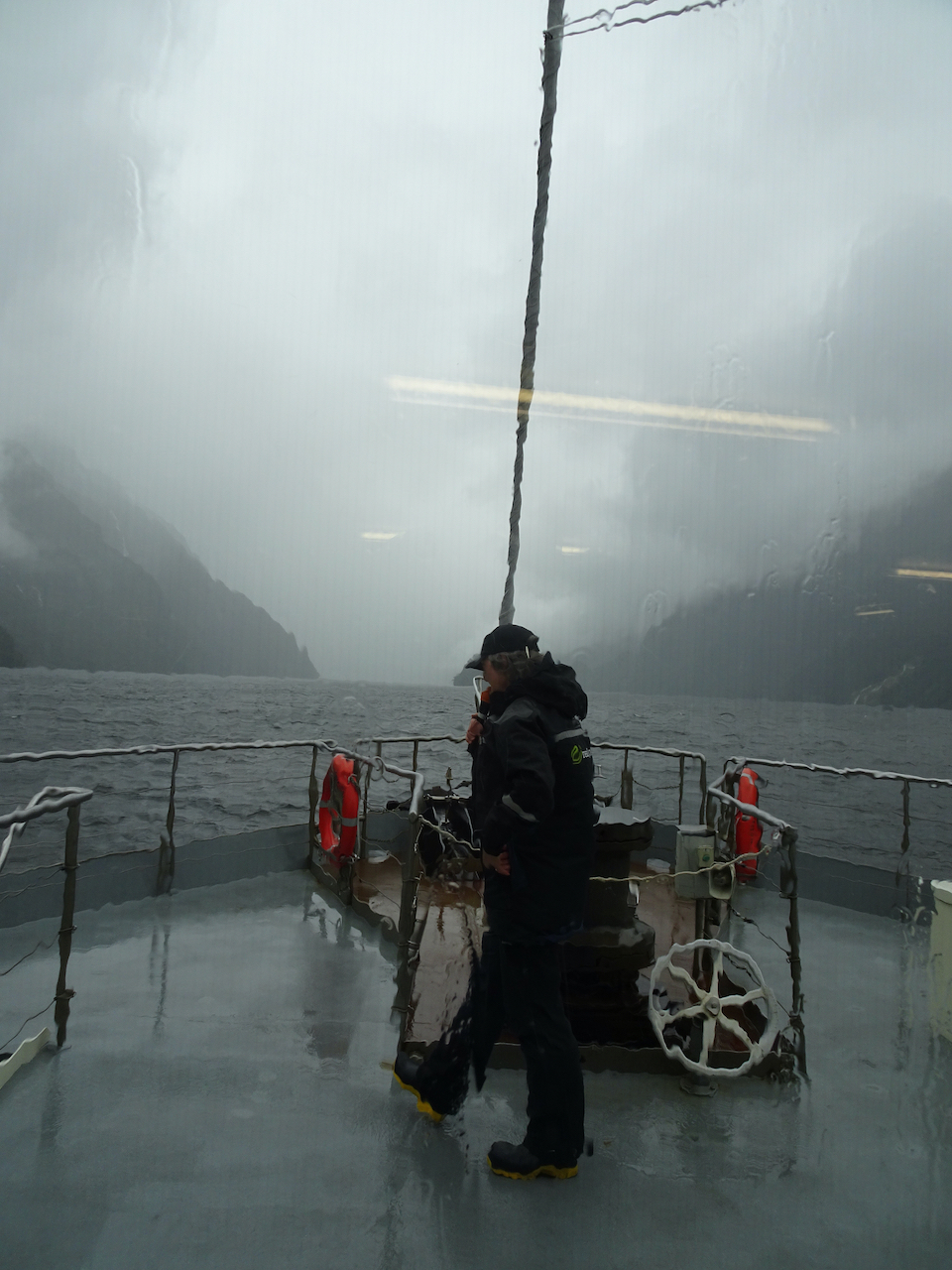 A rain pause as we continue west toward the Tasman Sea. 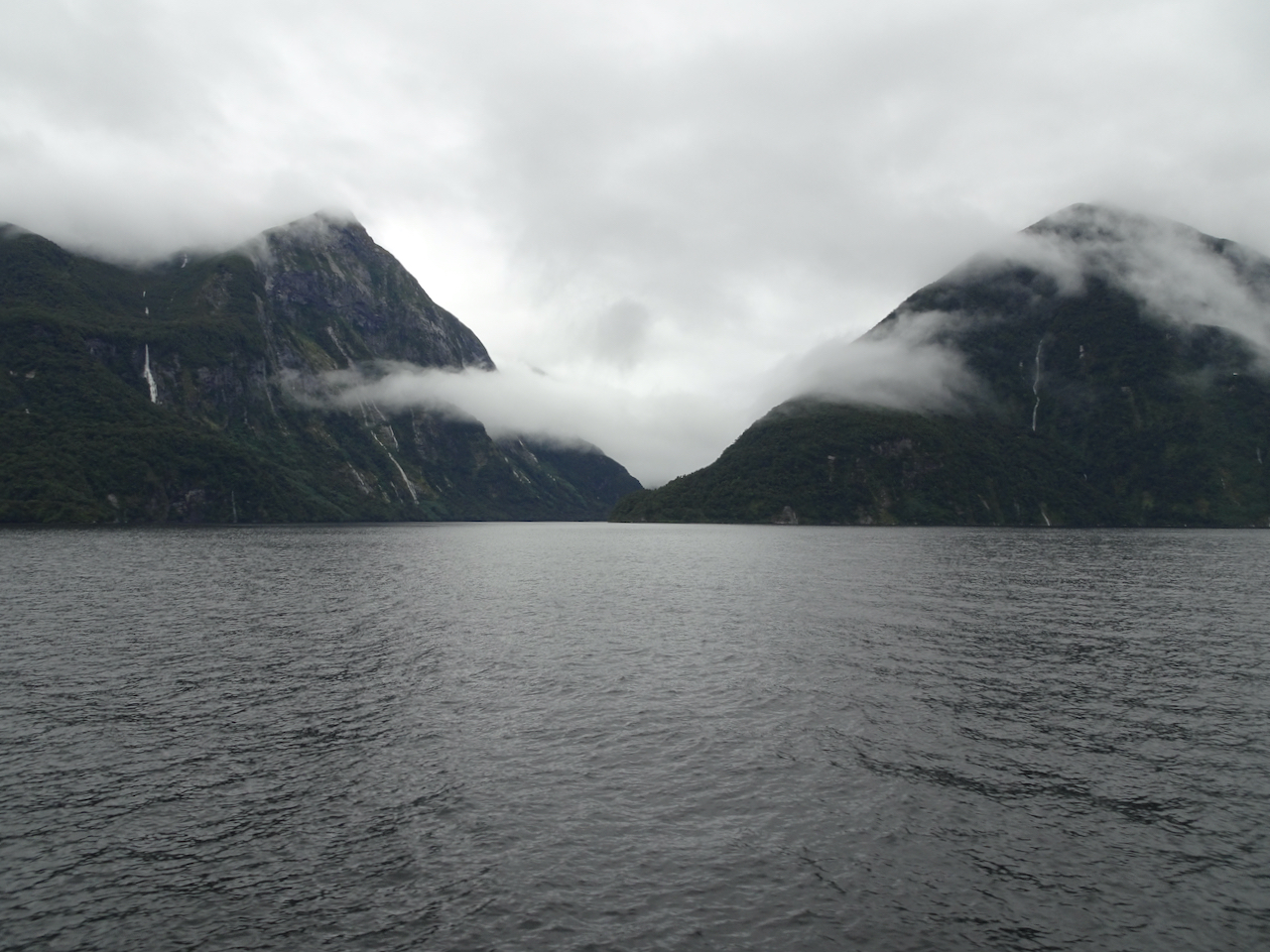 We travelled all the way to the entrance of the fiord with the Tasman Sea. We stopped to watch fur seals basking on the rocky islands in the sound entrance – also unphased by the constant rain. But of course, they are creatures of water and cold. 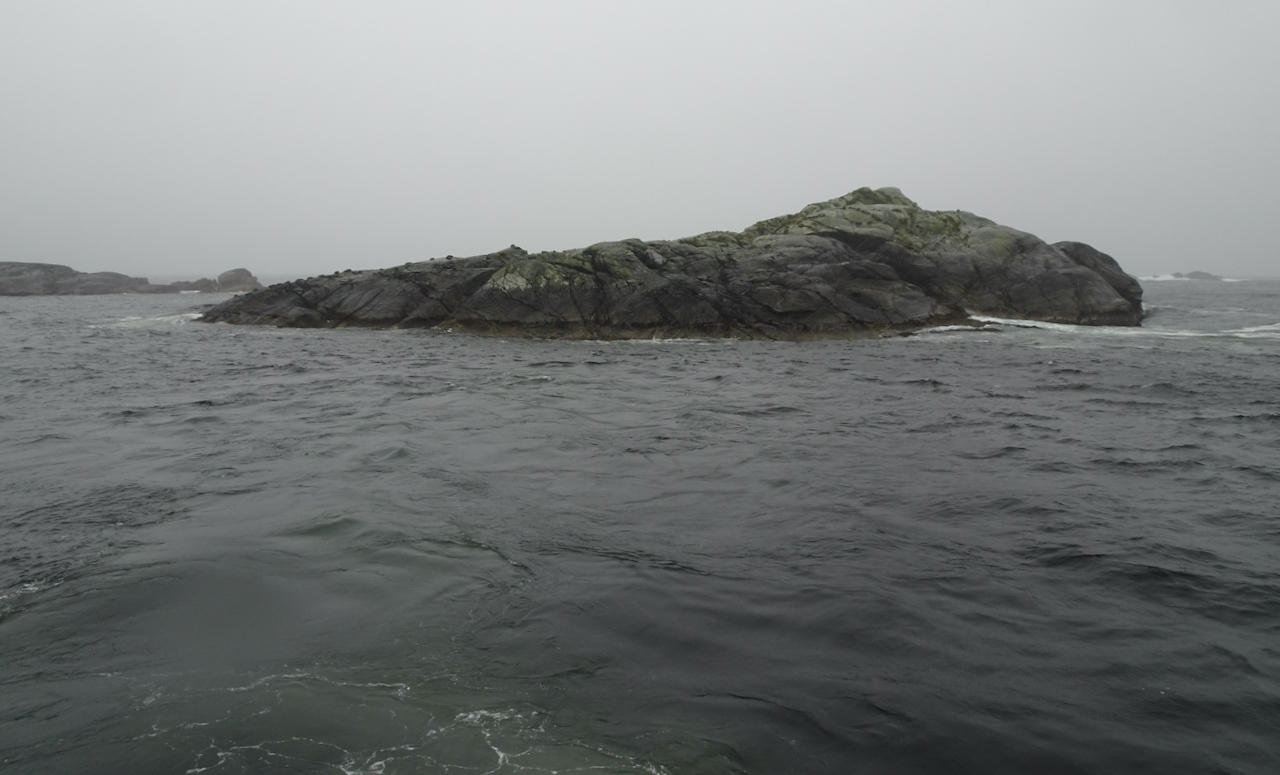 Fur seals on rocky islands near the mouth of Doubtful Sound. 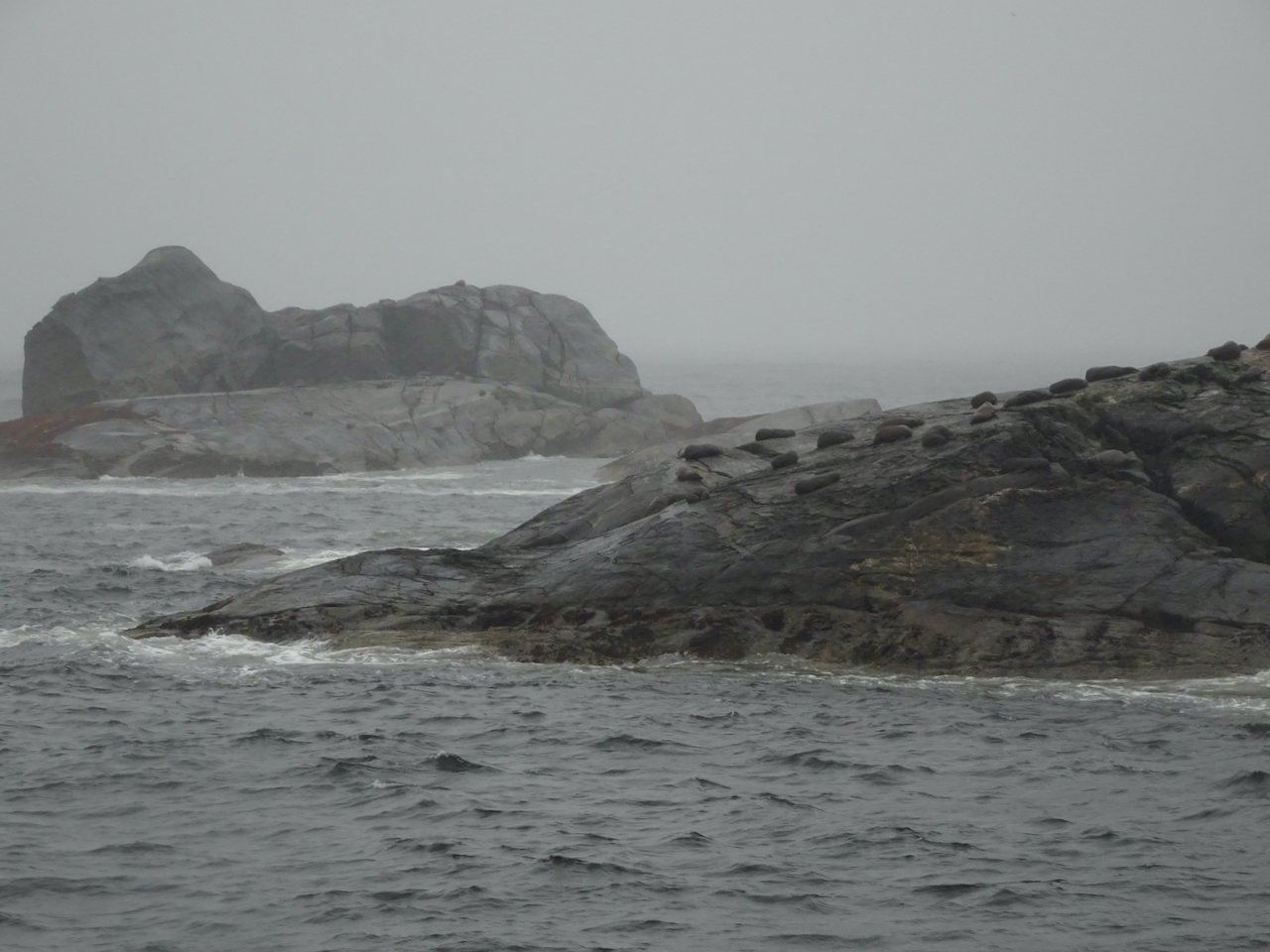 We turned back inland, still watching the waterfall-striped walls of the fiord go by. We reached the “activities” location and weighed anchor for a while. Here, most of the crew switched to guide mode. Most of the passengers, despite the rain, opted to go out in kayaks or rafts, to get a closer view of the walls and waters of the fiord. I might have joined in better weather, but it was still rainy and cold. I felt that just being where I was, in the middle of a fiord in the wilderness was a fairly extreme adventure for me. We watched the kayakers and boaters from the deck.

After they all returned safely, the crew changed roles again, and became ushers/servers for a delicious, many options, buffet dinner. It was all run like clockwork, yet not pressured or uncomfortable. Our little group sat in a booth with windows and enjoyed getting to know each better as the beautiful landscape drifted past. Later, we retired to our tiny stateroom and slept very comfortably in crisp white sheets. I peeked out our window occasionally, to see rain and dark and gray.

The next morning, breakfast was run again in buffet fashion, extremely efficiently, and we packed up, ready to enjoy another morning of viewing in Doubtful Sound. 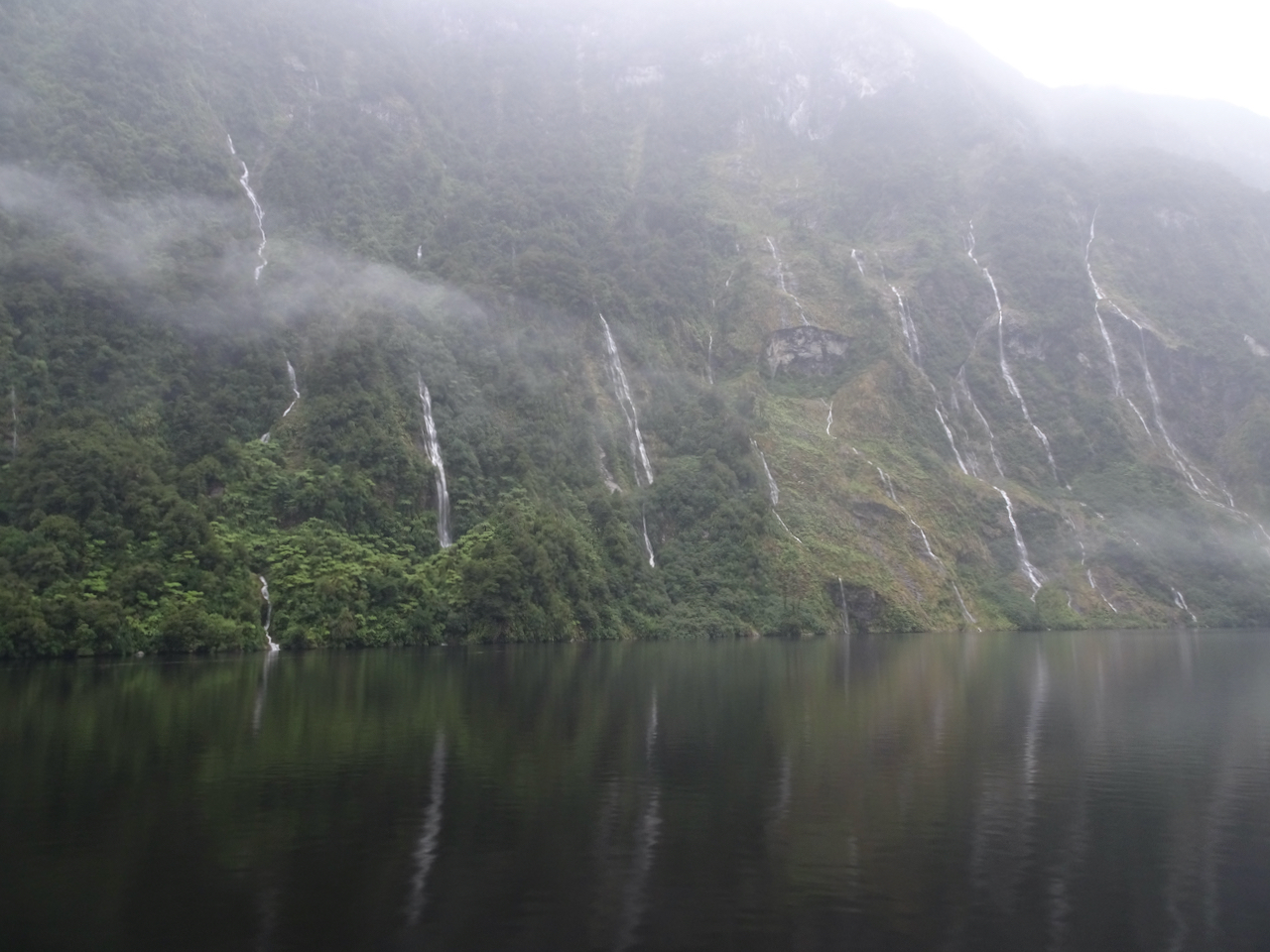 We traveled into the Hall Arm of the Sound, where we experienced a quiet moment – engine off, passengers in a preselected spot, five minutes of complete silence, during a break in the continuous rain. 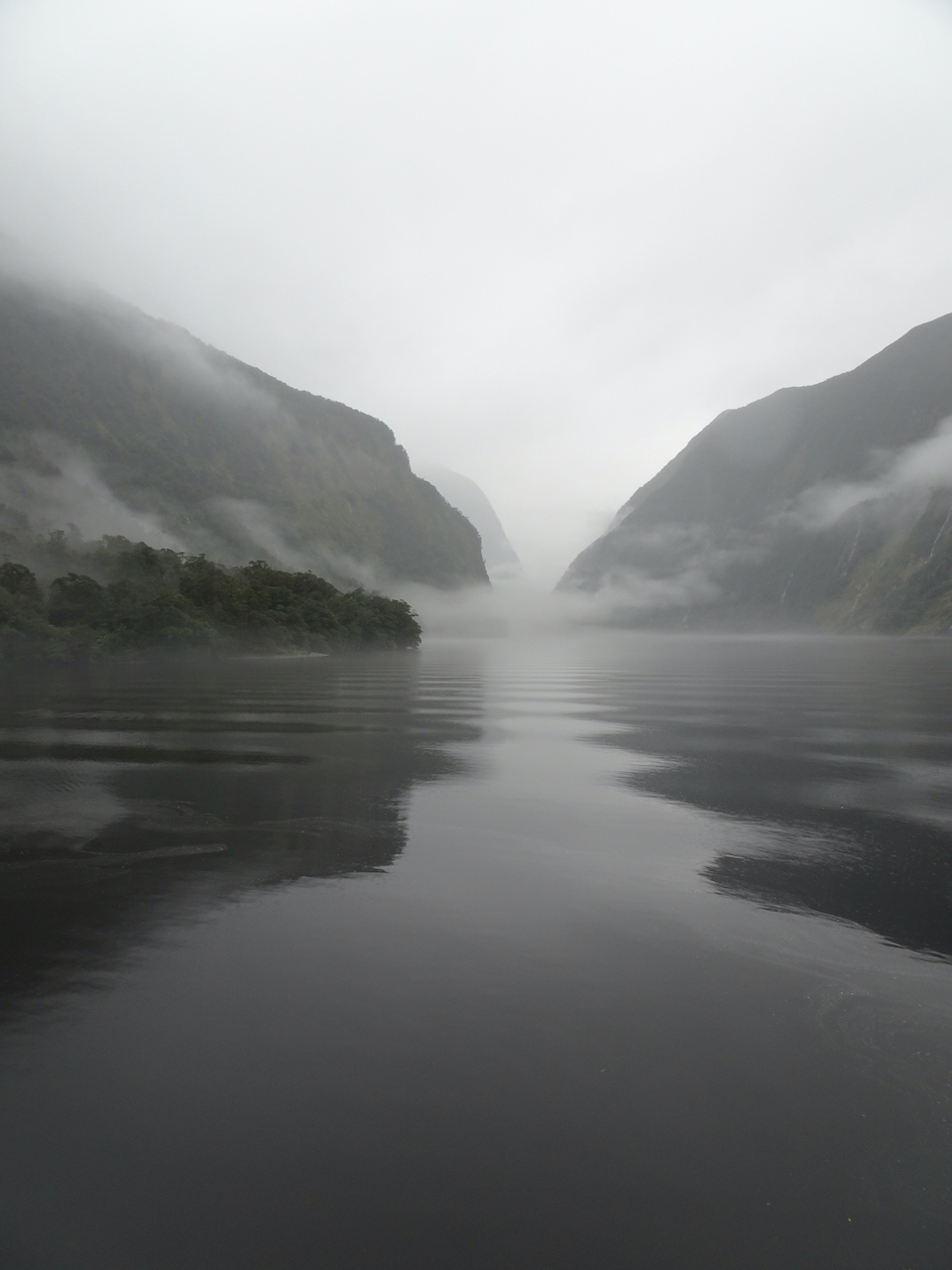 Afterward, the boat motored up again, dipped its snout into a flowing waterfall, and we eventually made our way back to Deep Cove. 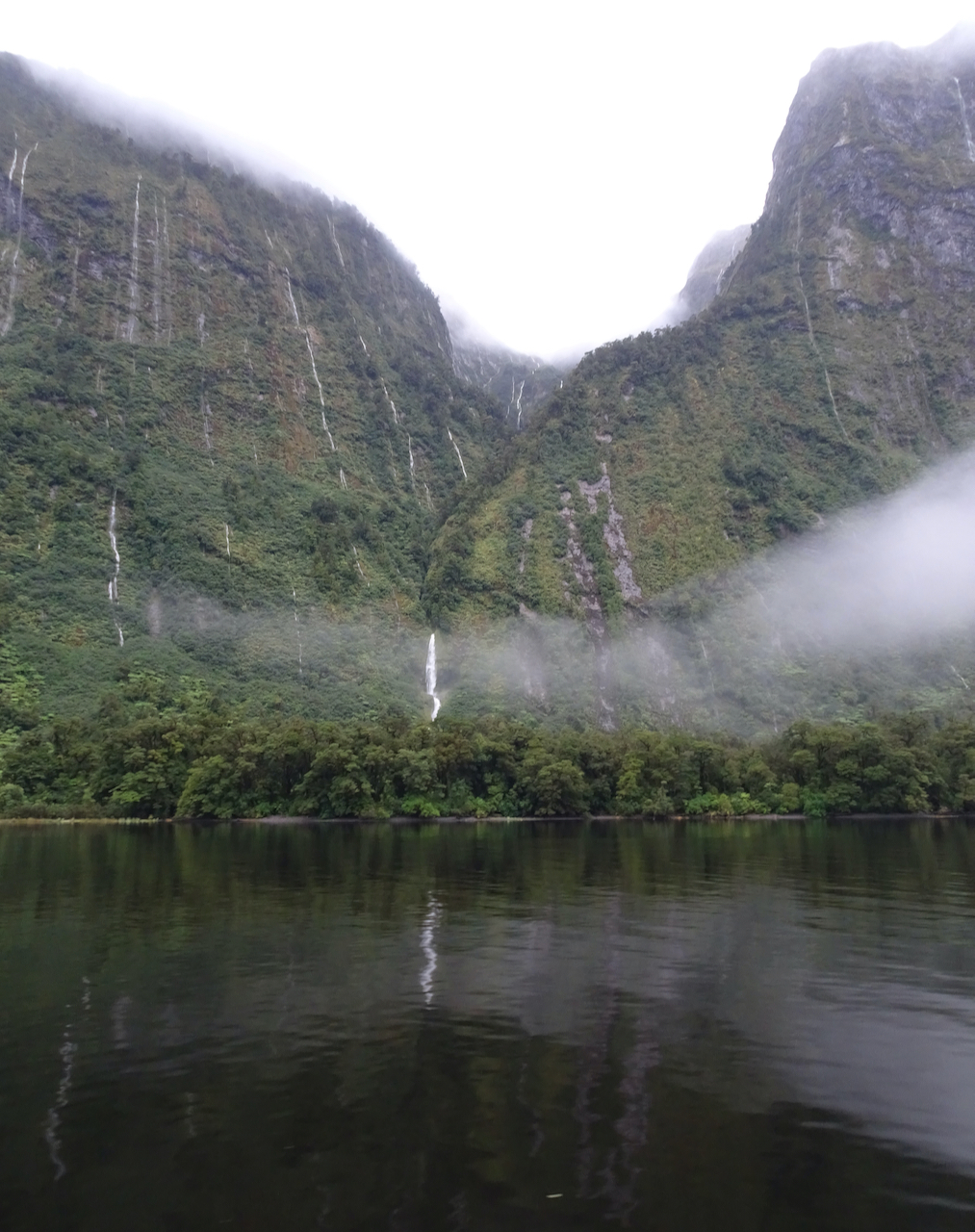 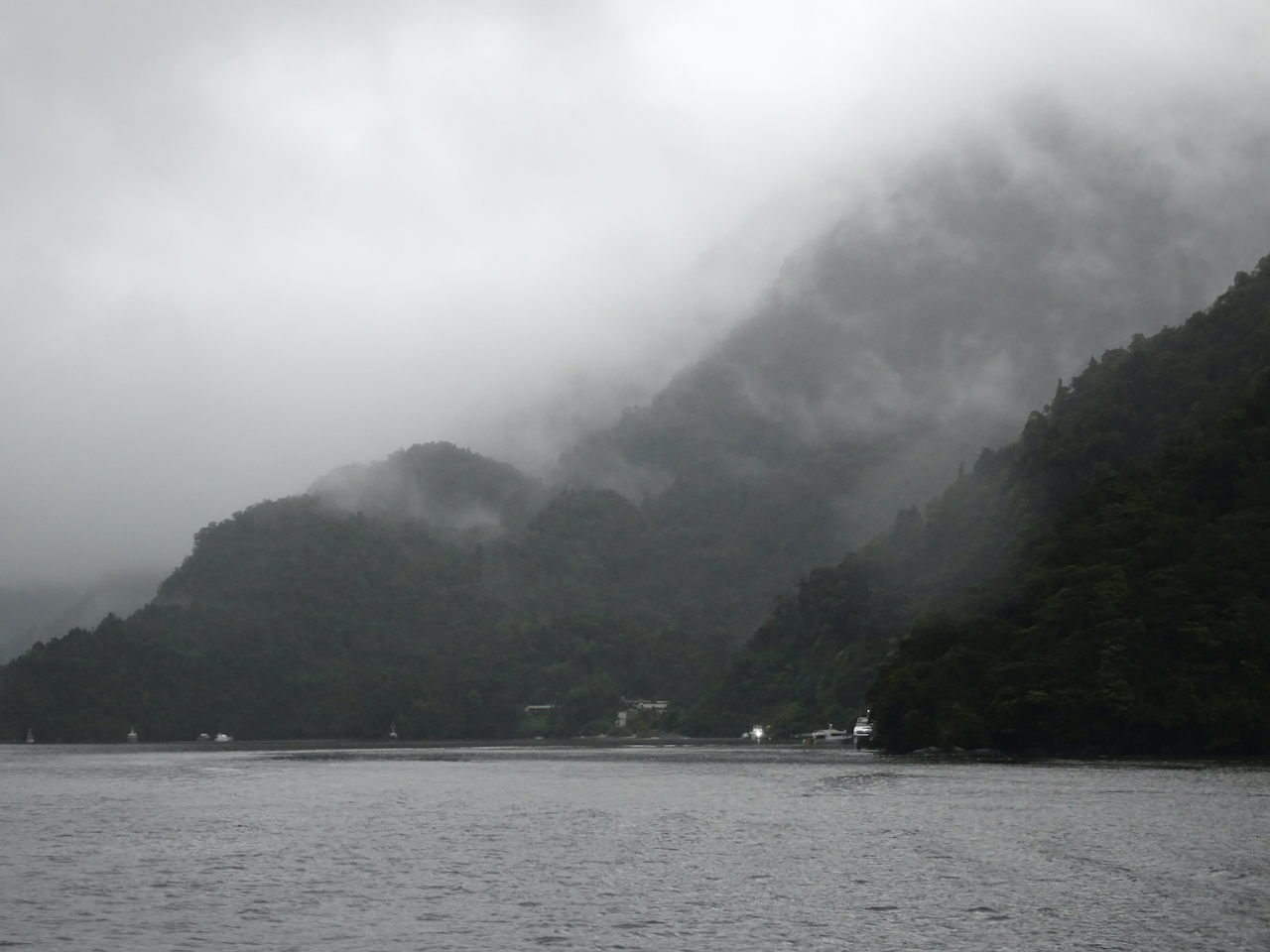 During both journeys across Wilmot Pass by bus, the drivers expressed concern about the river ford being washed out. Both times we made it across, but there was plenty of heavy equipment at the crossing keeping the road clear. We reboarded the ferry to Manapouri, ready for our next adventure.

Waterfall from the bus windows on Wilmot Pass.

Our next stop was supposed to be Milford Sound – a place we really wanted to see. We were supposed to drive to Milford Sound via Hwy 94, with a hike up Key Summit on the Routeburn Track enroute, and a short cruise on Milford Sound the next morning. Over the past 24 hours there had been over a half meter of rain in the area and more than a meter of rain during the four day deluge. All roads to Milford Sound were flooded. People there were stranded and moving to higher ground – no one could get in or out by land. It was several days before they were finally able to open the roads. Meanwhile, our guides and tour company had formulated a new plan for our tour. They found lodging in nearby Te Anau, accommodations that were open because the people with those reservations were trapped in Milford Sound, or because so many of the usual tourists from Asia this time of year were beginning to cancel travel due to a spreading coronavirus in that part of the world.  (I am finally writing this account about a year later, after almost a year of global pandemic. That was one of the early signs of it, though we didn’t really think too much of it in the moment.) Meanwhile, we had a new agenda for our tour, starting with a rainy walk on the Kepler Track near Te Anau.

We loved our Doubtful Sound experience. I might have liked it more had we had sun, but we had soo many waterfalls – I don’t imagine I will ever see more in such a short time. We got to experience an extreme rain event – a different sort of bucket list item, I guess. I am very glad we were with an experienced tour company for this time, because they very swiftly arranged new plans. I had been expecting a more rustic experience on the boat, but it was actually fairly luxurious – delicious hot meals, a dry viewing cabin, extremely comfortable bed with privacy, and amazing scenery. It was a beautiful immersive adventure! 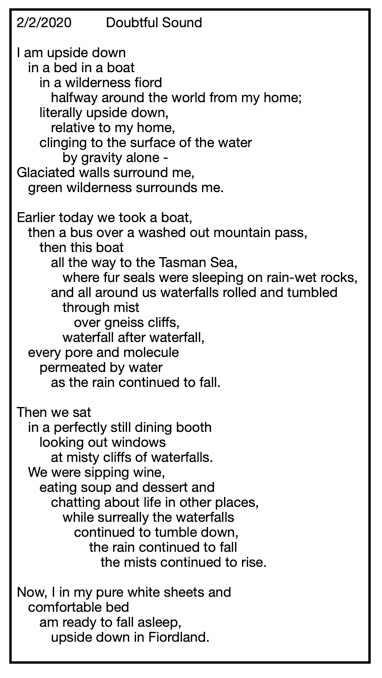