After finishing my first quilt, the Sunflower Sue quilt, I wanted to make another quilt. I was home for a couple of weeks during my first year of college, and saw a Log Cabin quilt in one of my mother’s magazines – McCalls, maybe. This was 1976, the bicentennial, and a period of revival of quilting in the national zeitgeist. The magazine quilt had a log cabin center, a piano key border, and was very scrappy. I made construction paper copies of the templates printed in the back of the magazine, and raided my Mom’s and neighbor Sally’s scrap fabric boxes again. Over the next year or so I cut out with scissors up to three log sets of different sizes from each fabric. I may have sewn one or two blocks together at this time, but mostly I left them stashed for the next few years as college activities took over my time.

I still have the original templates with my pattern files.

One summer (1982?) I was staying in San Francisco with Danny (future husband) while he was in medical school. I pulled out my log cabin strips and sewed them into blocks, one block a day. When I tried to put the blocks together, I realized that they weren’t exactly square – there was up to a half inch difference in some of the blocks, due to both inaccurate cutting out with scissors and templates, and variably estimated quarter inch seam allowances. So that was a problem waiting to be solved. The blocks got tucked away again for a few years while I finished grad school, got married, moved to the Portland, Oregon area, and had our first child. My poor baby was rather colicky, so poor us, it was nearly impossible to imagine leaving him with a babysitter. At this point, we realized we might never leave the house again so we bought a television and VCR to watch movies in the evening. We hadn’t had a TV for years. One day, while home with the baby I noticed a quilting program on the Public Television channel. I watched in fascination while Eleanor Burns of Quilt in A Day started slicing up fabric with what looked like pizza cutter. Squaring up blocks! Based on my son’s age, this would have been 1990 or 1991. I was amazed, enchanted, and immediately called the number on my screen to order a rotary cutter, a mat, and acrylic rulers!

I still have these original Quilt in a Day tools.

I squared up my blocks! I played with the layout, finally deciding on a color wash/barn raising setting, with the light and dark value halves of blocks creating concentric squares.

Around this time we moved to our current home in Portland, and I remember laying the blocks out, piecing them, then going to the nearby Fabricland store to buy border and backing fabric and batting. I basted with safety pins, as modeled by Eleanor Burns, and then I minimally quilted the quilt by machine stitching in the ditch along the block seams. 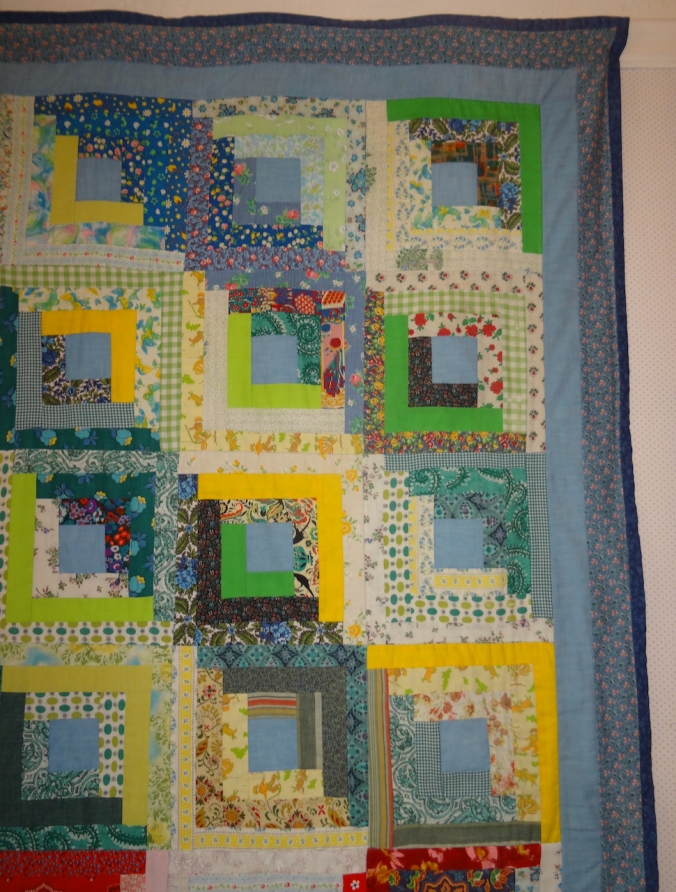 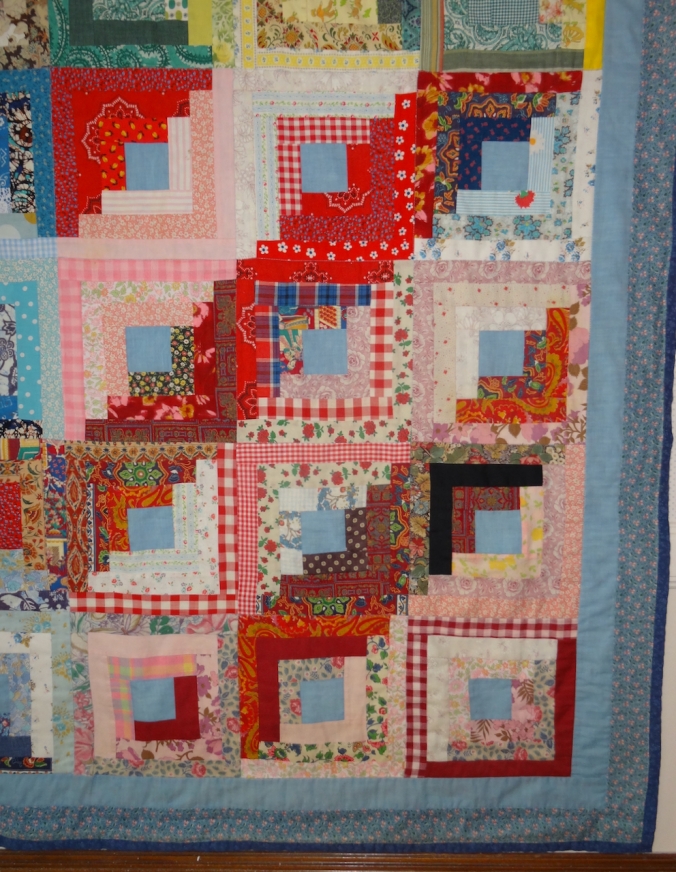 I made the binding by pulling the backing fabric to the front.

The backing was turned to the front and machine stitched down to create the binding. 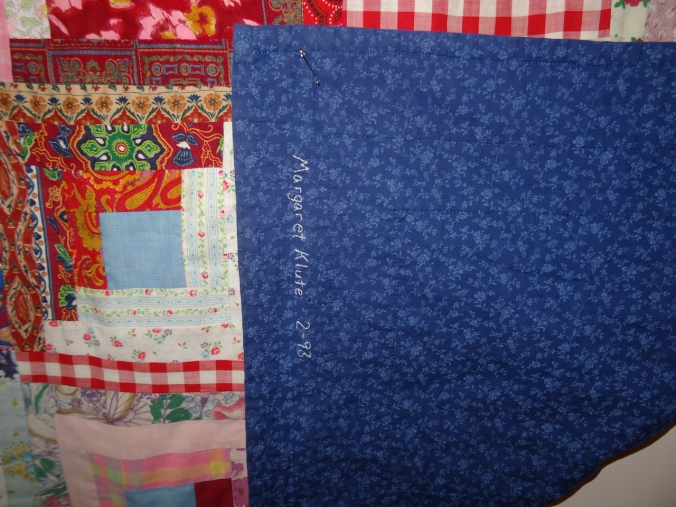 Close up of hand stitched signature.

I was very happy with the final quilt. I had used a thin cotton batting this time, so the quilting was easier. I learned by my experience, and by watching Eleanor Burns, the importance of consistent seam allowances. I still loved the idea of scrappy quilts, but I was beginning to get the concept of controlling the color palette. My next quilts would be made from a more limited fabric selection, with guidance from taking a few classes and using pattern books.

The Log Cabin quilt kept us warm for many years, and I was able to retire the now worn Sunbonnet Sue quilt. These two quilts share many fabrics in common, so I was able to continue to enjoy the scraps from my past as I used this quilt.