The Vista Ridge trail, trailhead at 4500′, is one of my favorite ways to hike to the summer alpine meadows along the Timberline Trail on the north side of Mt. Hood.  The area suffered a large forest fire in 2011, so much of the lower part of the trail is through a burned forest.  Each year the undergrowth in the burn zone has increased, and there are many huckleberry bushes now filling in the ashy ground, but there is little shade in the scorched forest.  We see glimpses of the stark white peak of Mt. Hood through the screen of burned trees, and each year we notice more fallen trees.  Usually we wait to hike until the snow has melted out up to the Timberline Trail at about 6000′, and we have noticed  abundant lily seed heads lining the trail through the burn zone.  We have also seen the social media posts about the incredible avalanche lily display that follows the snowline up the mountain. We have previously seen swathes of lilies in the upper trail area, but this year we went early enough to see the lower trail in full bloom.  With the heavy snowpack this year, it may be a while before the Timberline trail is snow free.

There were millions of lilies along the trail and throughout the forest floor. The lilies in the first patches we encountered were fading and turning pink, petals tips curling up. But soon enough we were surrounded by fresh blooming flowers with crisp white points and yellow centers. They were beautiful and amazing and the pictures speak for themselves.  It was lovely to be able to walk through them.  We hiked to about 5300′, where snow obscured the trail and the lily plants in the patches of snow free ground had not yet bloomed. 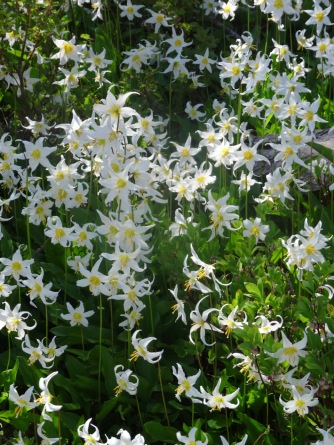 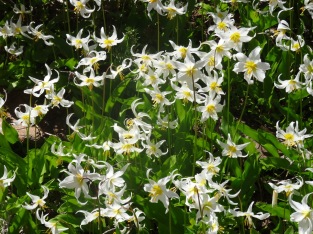 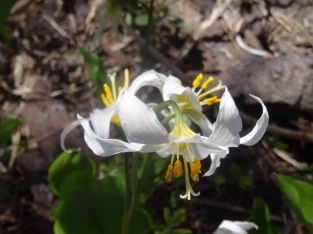 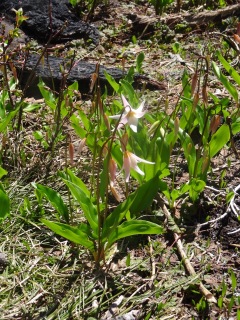 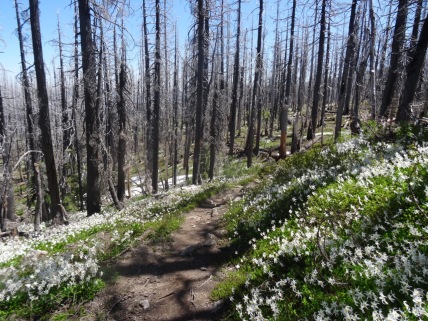 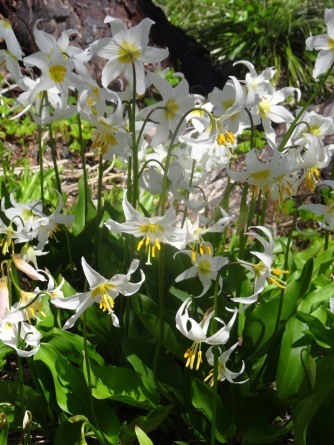 Meanwhile, we were walking among  the ghosts of a forest past – trees reduced to spiky trunks, sloughed black bark, chalky curled branches and ashen soil.   Trees with haunted sad faces, gaping mouths, and twisted empty eye sockets occasionally loomed above, watching us walk by. The contrast between blue sky and bare trees creates a starkly beautiful if tragic setting. 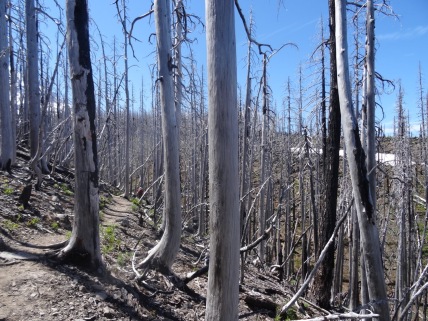 Two photos from previous year’s hikes show one of the tree faces that I couldn’t find this year, so it must have fallen.  The August 2014 photo shows abundant lily seed heads.  In March of 2015, a low snow year, I saw the same face with a snowy ground. 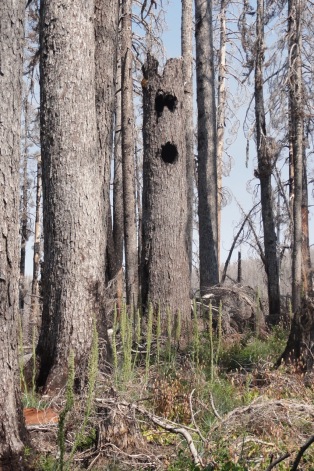 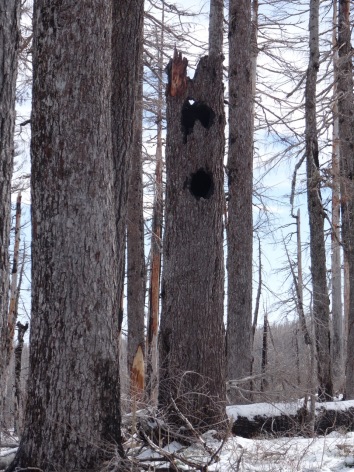 Returning down the trail, Mt. Adams seems to float  on the skyline, reminding me of Carl Sandburg’s Village of Cream Puffs.

Mt. Adams to the north

There were only a few other wildflowers blooming on this day, including some seen along the road to the trailhead.  Our hiking mileage for the day was 4.2/800 feet. 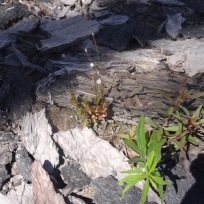 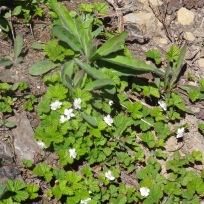 rhododendron along the road 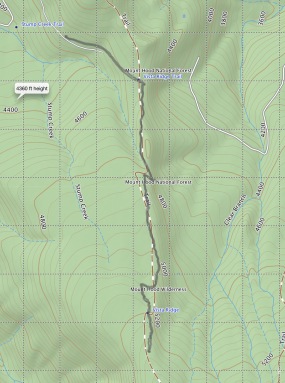 2 thoughts on “11. Avalanche Lilies and Haunted Trees of Vista Ridge”