We began this day walking from our lodging down the steep poetry- and flower-lined path to Lynmouth. 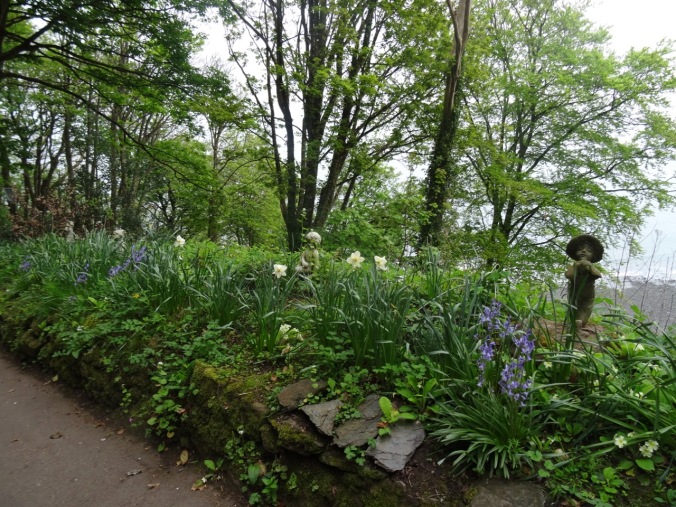 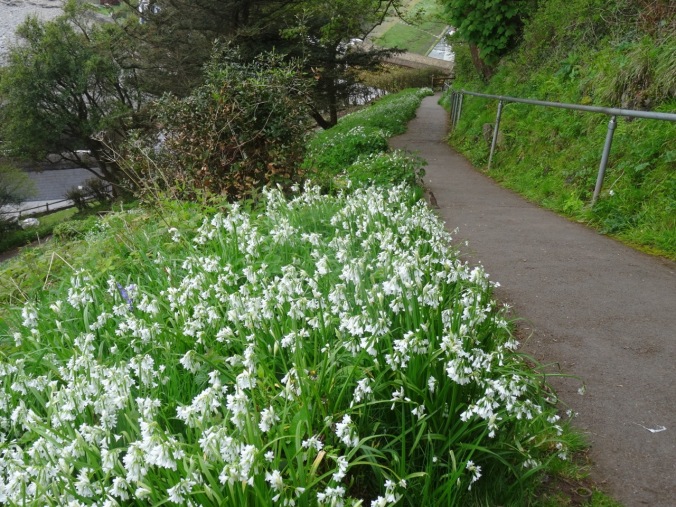 Almost to the beach at the bottom of the cliff.

There we visited the Exmoor National Park Visitors Center and made plans to visit Dunster and Porlock, to the east of us. Lynmouth is the intersection of four trail systems in Exmoor, marked by this sculpture of a walker, and the trail signs. 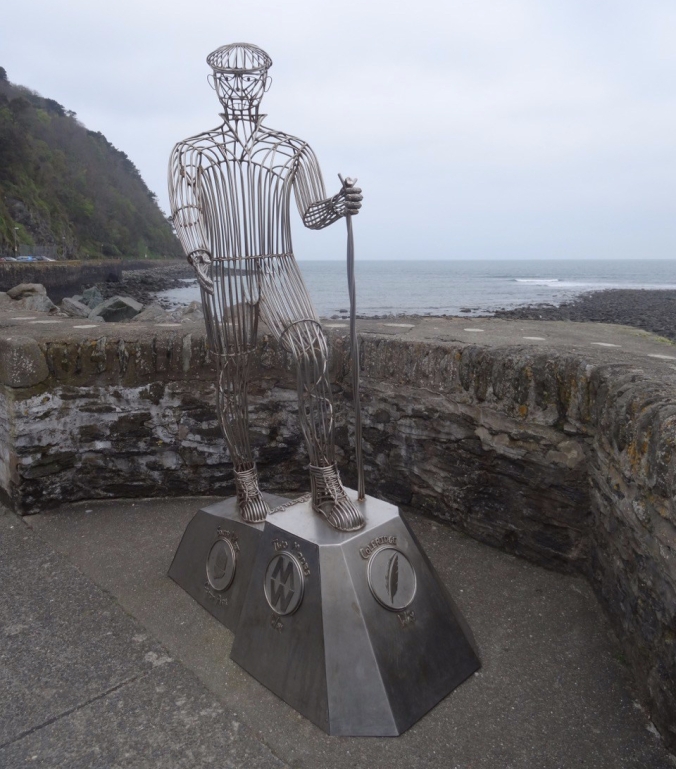 As we walked down the path to Lynmouth, we had crossed the tracks of the Cliff Railroad several times.

The Cliff Railroad is a Victorian era funicular with two counterbalanced cars connected by cables and pulleys that simultaneously rise or fall as water is released from the water tank of the lower car.  The cars each have 700 gallon water tanks. The tank is refilled from a stream at the top of the cliff, and released to the stream at the bottom of the cliff. The power is completely passive – just gravity imbalance created by the weight differential between the two cars. The railway has been in continuous operation since 1890. 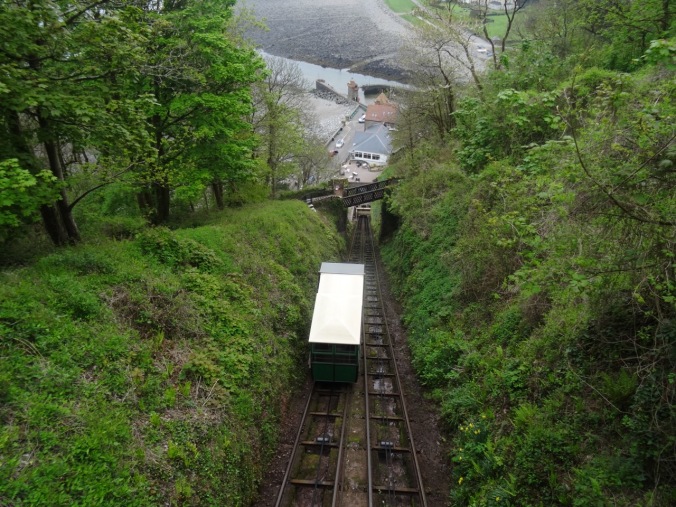 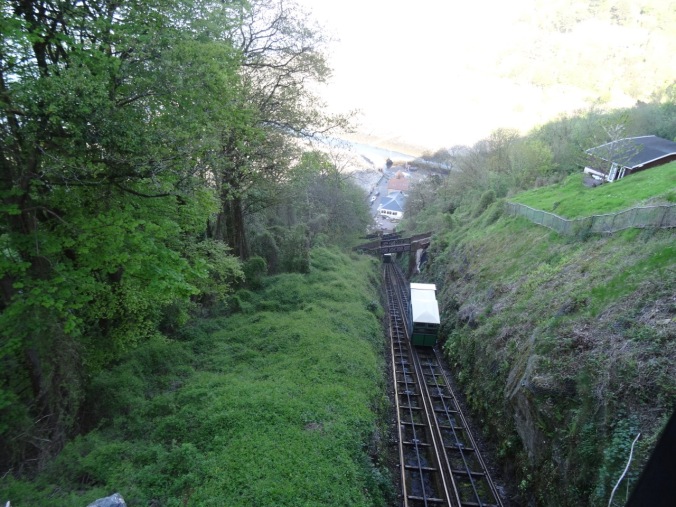 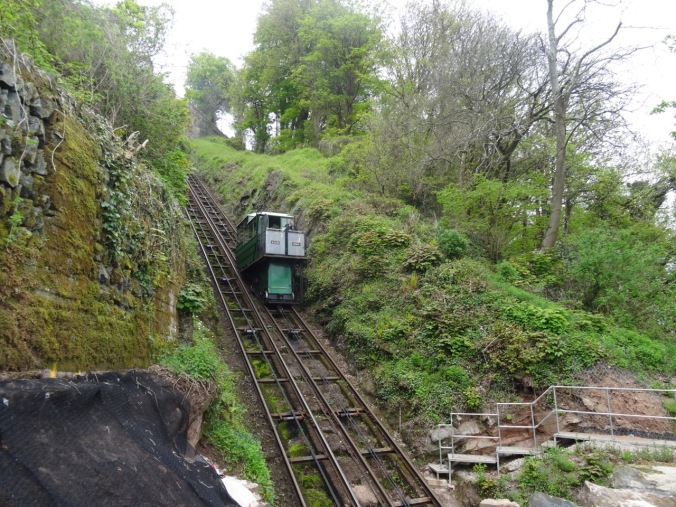 We returned to Lynton via the Railroad, a much easier way to climb this 500 foot cliff than going back up the path.

We walked through the medieval town of Dunster. Dunster Castle, on the hill overlooking the town, dates back to at least 1086, shortly after the Norman conquest in 1066. 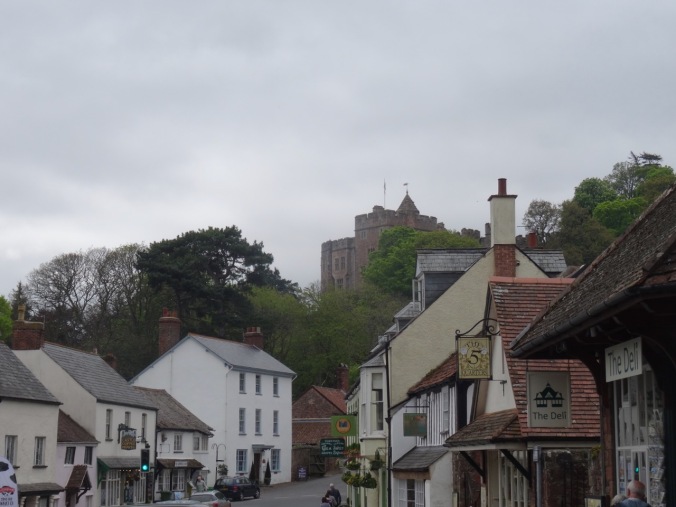 We walked around some of the castle grounds.

The Yarn Market, where trade in cloth was conducted, is about 400 years old.

The Water Mill is about 200 years old. We looked at the machinery, but the mill wasn’t in operation today. 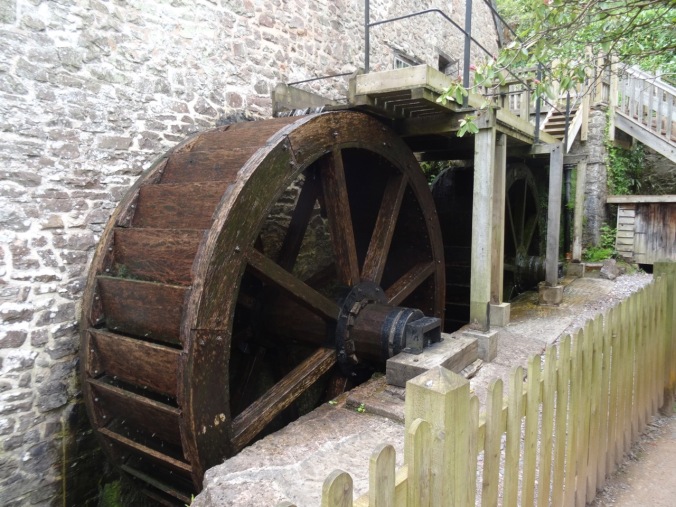 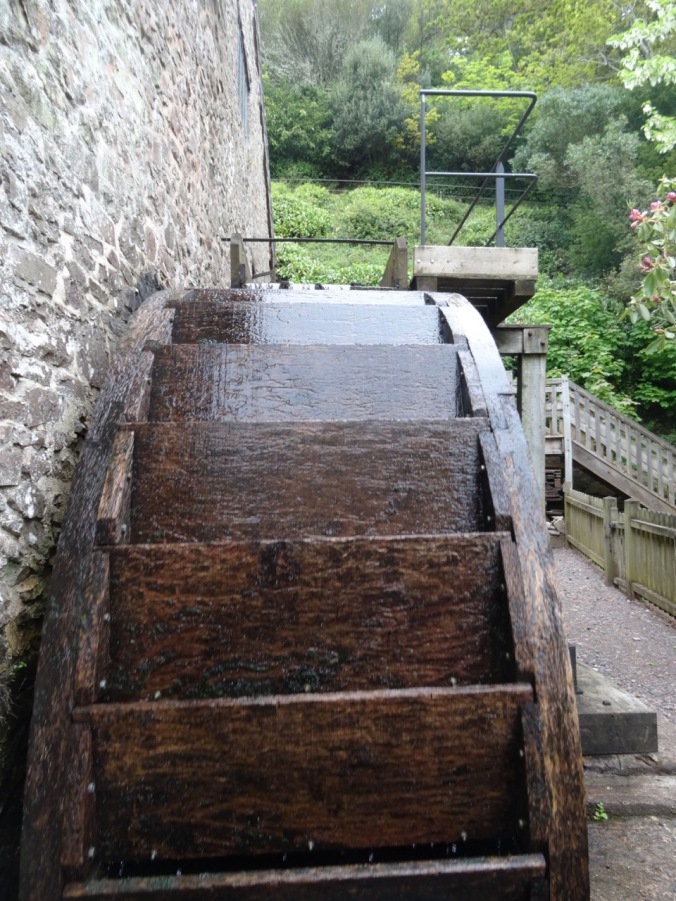 One of the flour mills.

Castle gardens near the mill 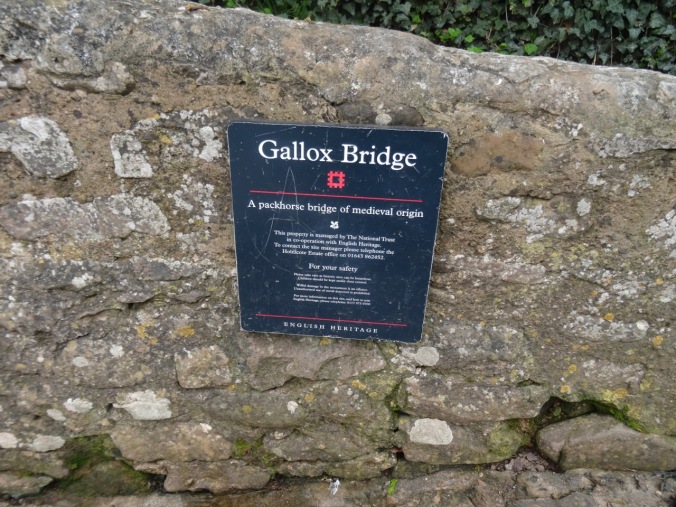 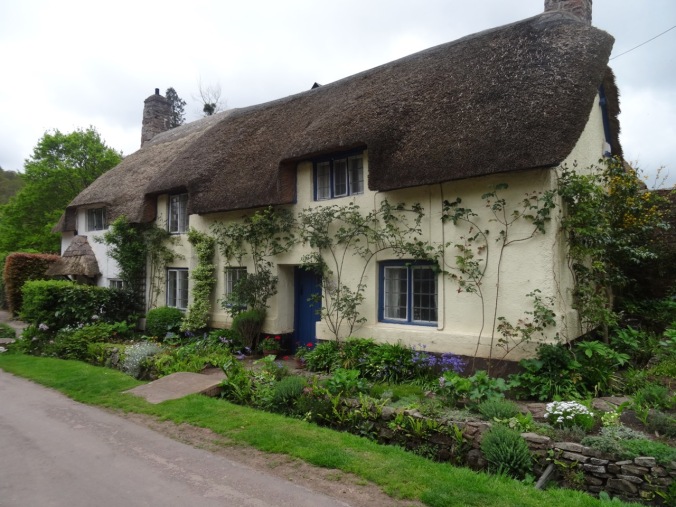 We drove back west to Porlock, where the National Park Guide had recommended a wildlife walk across the marsh. 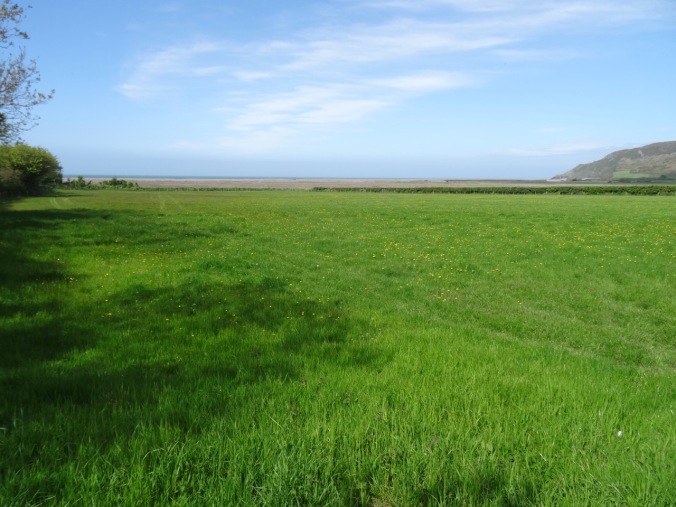 The path to the marsh.

Boardwalks across the marsh

Looking back toward town. 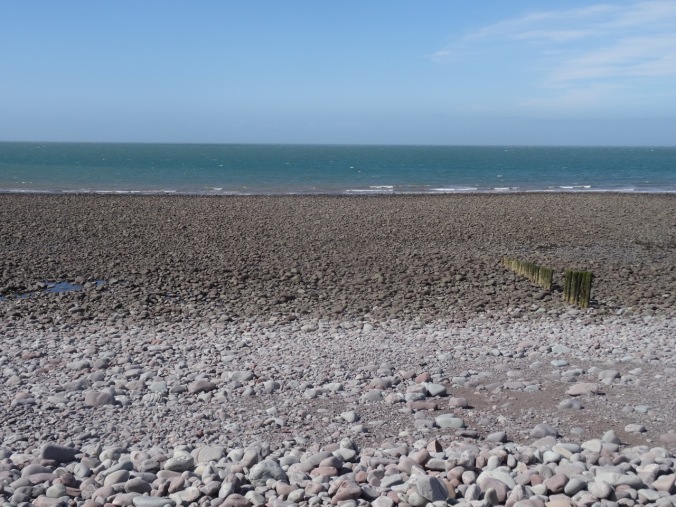 View out to the Bristol Channel from the top of the berm.

View to the east from the top of the shingled berm.

We did not see any wildlife, perhaps because the tide was out, just the shingled beach and the wide views, but it was good to stretch our legs.

My quilter’s eye noticed geometric patterns in the architecture in Porlock.

We stopped at an overlook for the wide view of Porlock. From here, we headed back to Lynton for the dinner.

Our Victorian Lodgings in Lynton:

My husband had selected this lodging, so I hadn’t realized before arriving that we would be staying in a converted Victorian manor house, built by a London mogul for his wife in 1870. The home was built on a ledge blasted from the cliff.

A large ammonite embedded near the entryway.

The decor is Victorian, and most of the rooms are situated around a large communal open staircase and balcony, invoking the setting of an Agatha Christie novel. 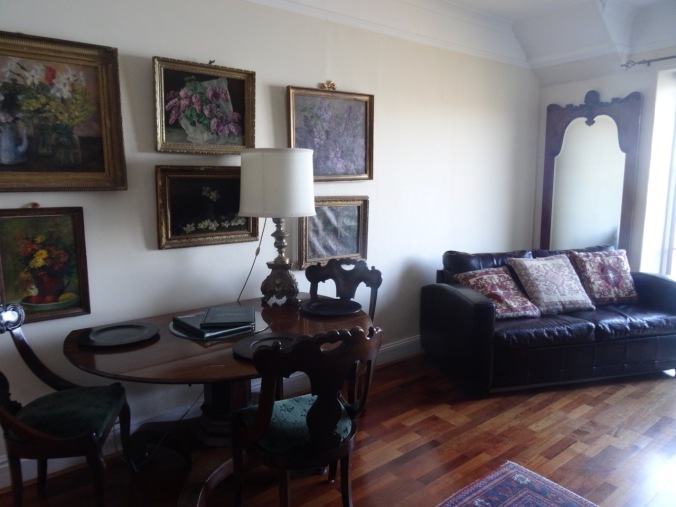 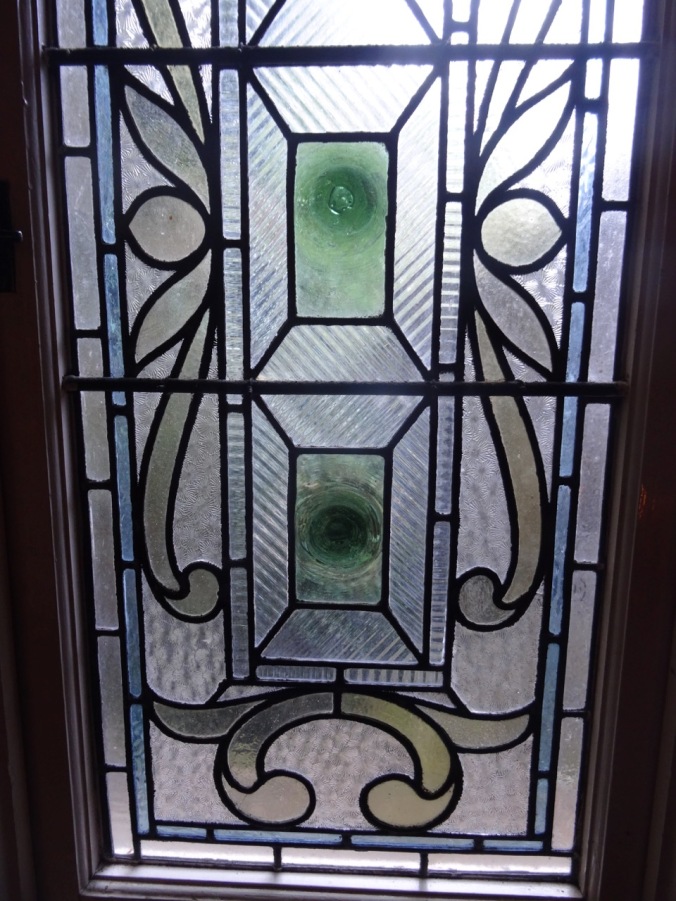 There were few other guests during this off season visit, but I would guess the patio tea service would be popular with walkers going to the Valley of Rocks from the Cliff Railway in the summer. 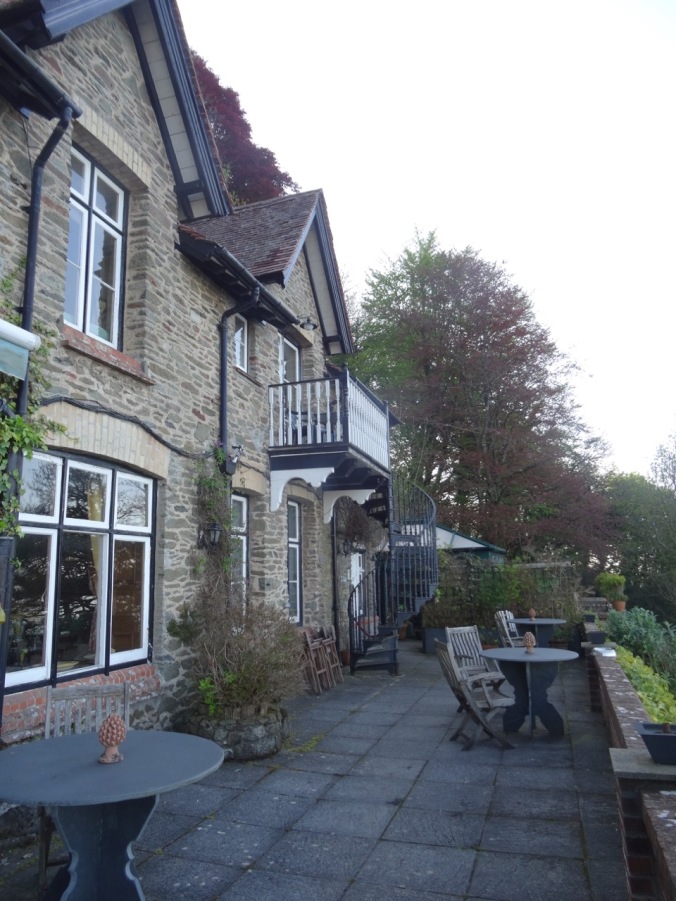 Our balcony and stairs leading down to the patio where tea is served with an amazing view.

Our self-catering apartment had updated plumbing and kitchen, with a private, very tiny balcony and spiral staircase, and a tremendous view across the bay to Countisbury Hill and Lynmouth Bay. We enjoyed the location and historical ambiance.