What joy to step with boots on the trail again today, – a bright blue sky, bitter wind, December-low-angle light sparkling on the water day -in the eastern Columbia River Gorge.  Trail of dirt and stone and oak leaf duff winding up alternately through golden grasslands and black cliffs of the Missoula flood scoured columnar Columbia Plateau basalts.  White caps on the river, bare oak branches, luminous grey clouds to the west raining on the Cascade crest, with only the eastern flank of Mt Hood visible in the clouds if you know where to look. Sounds of wind and ravens and the occasional train. Deep memories of where the yellow bells, purple grass widows, golden stars (and poison oak!) will be come spring….

Views from the Convict Road: 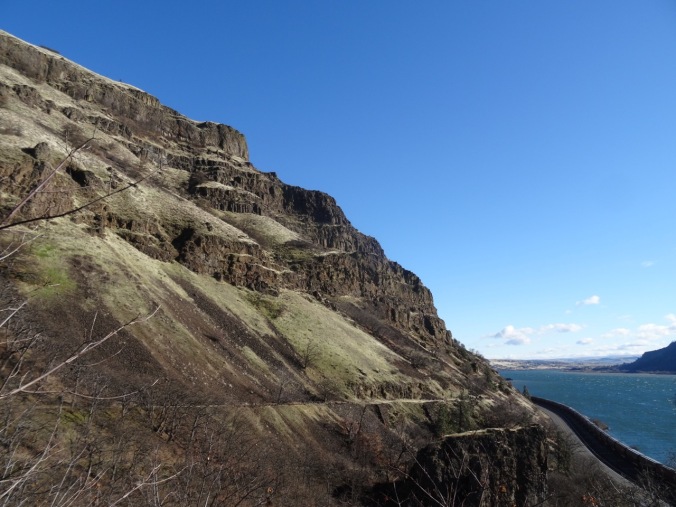 Views from the lower plateau: 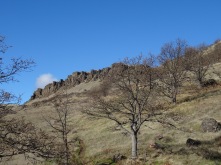 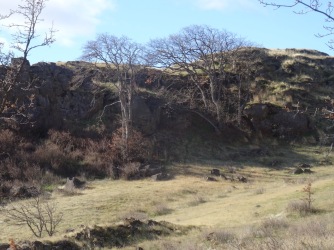 Along the trail to the upper tier: 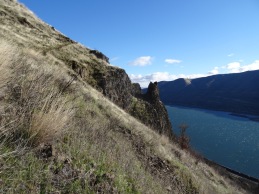 Views from our high point: 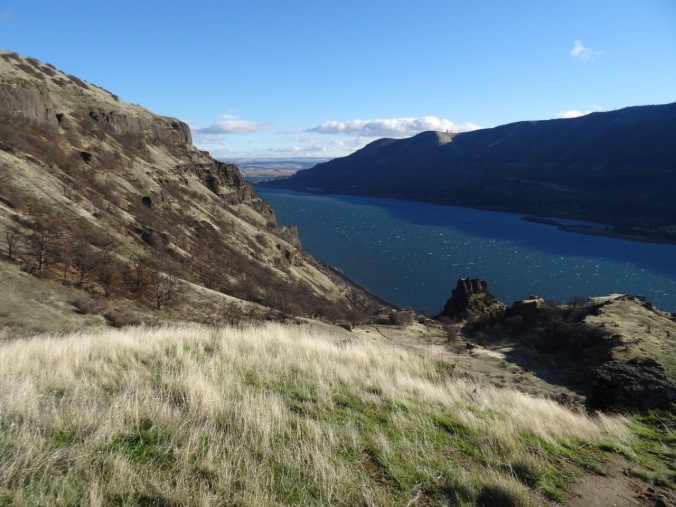 And looking back up from the Convict Road to where we were: 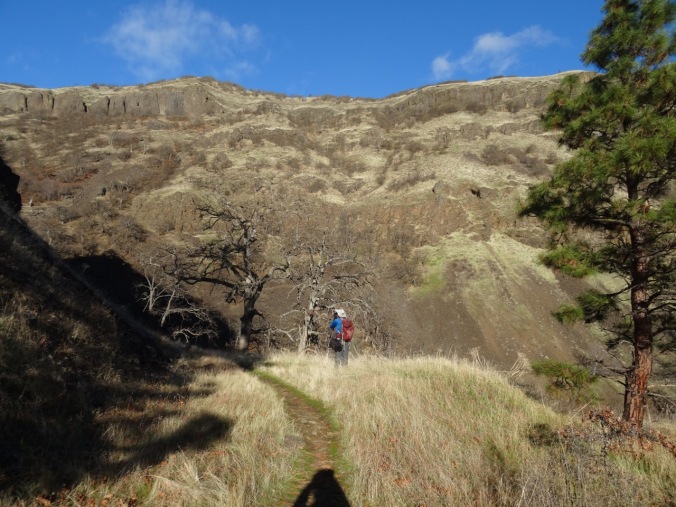 We hiked about 3.5 miles, 1000 feet today. We turned back at the cliff high point where the trail heads inland then farther east toward the remnants of the old cherry orchard.

We saw a beautiful interplay of sun and clouds while driving back west.

West view from the Hood River bridge into the gorge 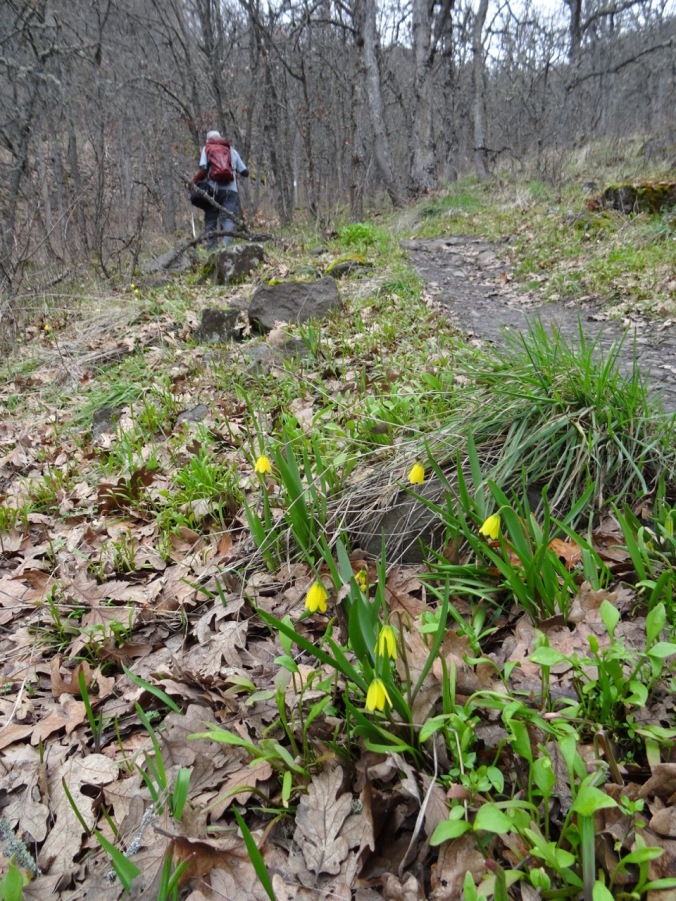 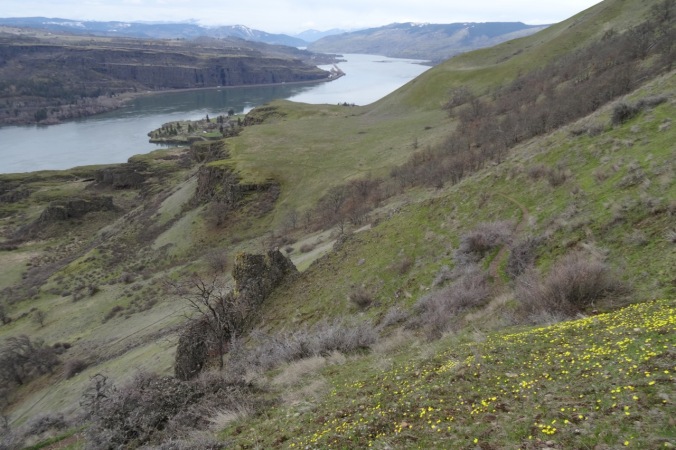 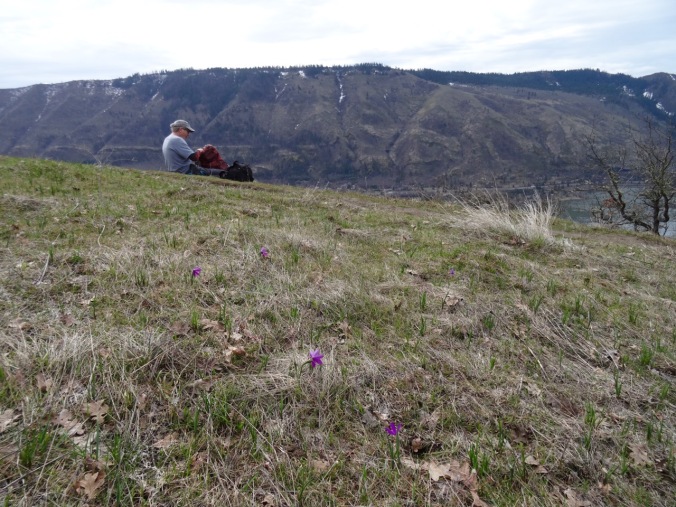 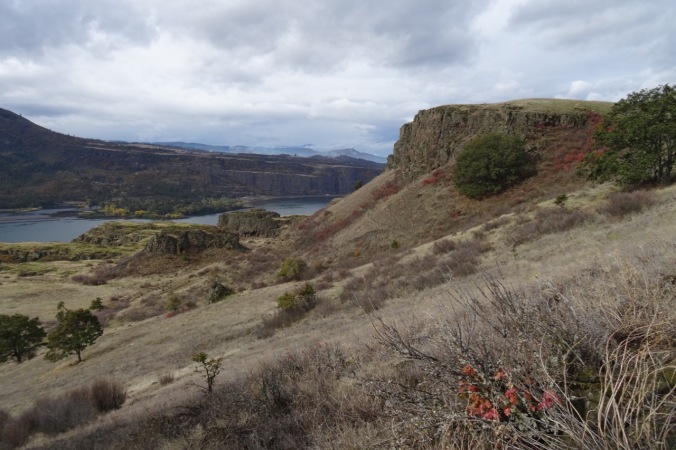 I distracted myself this week by sewing all the clamshells together on my Atmospheric River quilt.

Other Adventures this week were less pleasant, including a horizontal trip in an MRI machine, several blood draws and waiting rooms, as well as scheduling a surgery date in January to remove something that a doctor discovered by chance while looking for something else.  What luck, really – if all goes as planned the long term prognosis is great and there will be no lasting harm.  Still it is an unexpected and unasked for journey. So after the emotional trauma of this week, it was with great joy that I ventured on to a dirt and stone trail today in the blue sky, bitter wind, golden hills, and black cliffs of the eastern gorge.