Portland has been HOT (95 to 105) and SMOKY from the BC and other Cascade wildfires.  My visiting sister, my son and I decided to head west to the coast for some relief.  Our initial plan was to climb Neahkanie Mountain, an easy hike with great views, but the peak was fogged in.  We opted instead for the five mile round trip hike to Cape Falcon from the Oswald West State Park parking area.  The beach is a popular surfing spot, and the trail took us down to the beach where many were riding the waves and enjoying the 60 degree air temperatures.

Cape Falcon (our goal) is the far ridge beyond Smuggler Cove

We followed the well worn trail past a small waterfall and out to the Cape where we watched the fog roll in and out, obscuring views and keeping us cool.  We found a shady perch to eat lunch, then hiked back to the trail head, tripping over some of the many exposed roots on the trail – it could use some work, to be perfectly honest, but the cool temperatures and beautiful views make it hard to complain.

Looking down on Short Sand Beach from the trail

Daisies and hemlock on the Cape

View to south from the Cape

View to north from the cape

We drove back north on HWY 101, and stopped for a while at Hug Point State Park.  The receding tide was still high, so we could not quite make it on to Hug Point, but we sat for a while in the late afternoon near the waterfall, dipped our toes into the Pacific Ocean and enjoyed the peace, and the cool temperatures. I was able to get one iPhone photo of the waterfall without other beach goers in it.

Castle Rock from near the Hug Pt Waterfall

And because I have been really enjoying the LOOKBACK aspect of writing this blog, despite, or maybe because of, the rabbit hole nature of digging through my photos, here are two comparison photos of the Hug Point waterfall, and the view south  toward Castle Rock from Hug Point, taken May 8th, 2016, when we were there for a super low tide.

We stopped in Cannon Beach for a typical post beach day meal at the Pelican Brewery (clam chowder, fish tacos, fish and chips), then returned eastward on Hwy 26, back over the coast range to Portland and home, where the hazy smoky air and hot temperatures absorbed us into their gloom.  Next weekend is predicted to be in the 80s; perhaps the wildfires will calm down and the smoke will dissipate.  One can only hope, as it is rather tedious to complain about the weather.

Meanwhile, back in Portland:

By the weekend, the heat spell finally broke.  I pulled open the living room shades for the first time in two weeks, and there were plums on our plum tree, raindrops on roses, and cherry tomatoes for my birthday eclipse bowl. 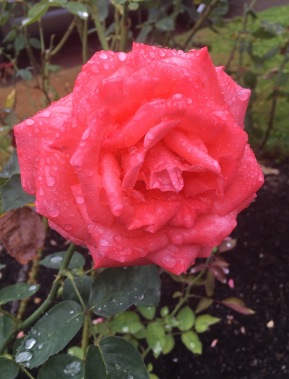 And, somewhere in Peru…

They made it to Machu Picchu!