We spent a few days hiking east of the Cascade crest and the rain. We stayed in a small hotel in the small town of Moro, and explored two Oregon State Parks for the first time, then visited the Columbia Hills in Washington on our way home.

We admired the White River Falls from the overlook, then walked downstream to see the lower tiers of the falls. We were about 2 miles upstream from the confluence with the Deschutes River, and about 50 miles from the source, the White River Glacier on Mt Hood, near a favorite winter snowshoe location. Here, the White River tumbles over cliffs, past the ruins of a hydropower plant that was abandoned in 1963, when a giant dam on the nearby Columbia River was built.

This is a beautiful falls, though the surrounds are a bit of a wasteland – cement and disconnected pipes, wire grids, a broken building with roof gaps, graffiti, tumble weeds and leaves blown in, plants growing out of the cracks, moss in the crevices. 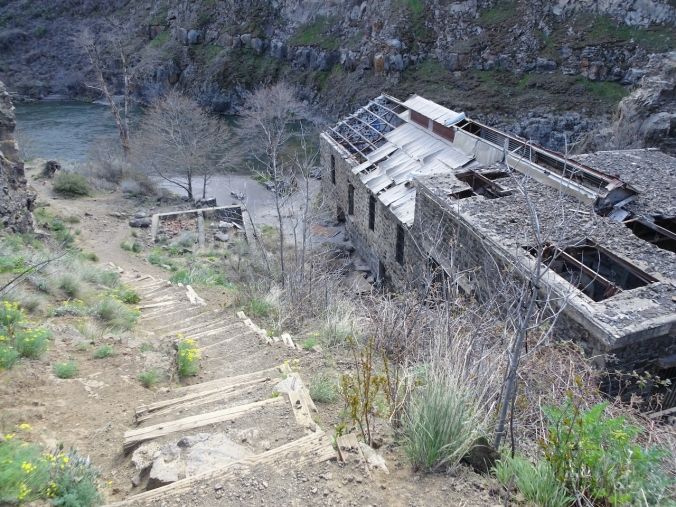 Bright yellow balsamroot and parsley were blooming around the canyon, and gold fiddle neck striped the edges of the rocky path. 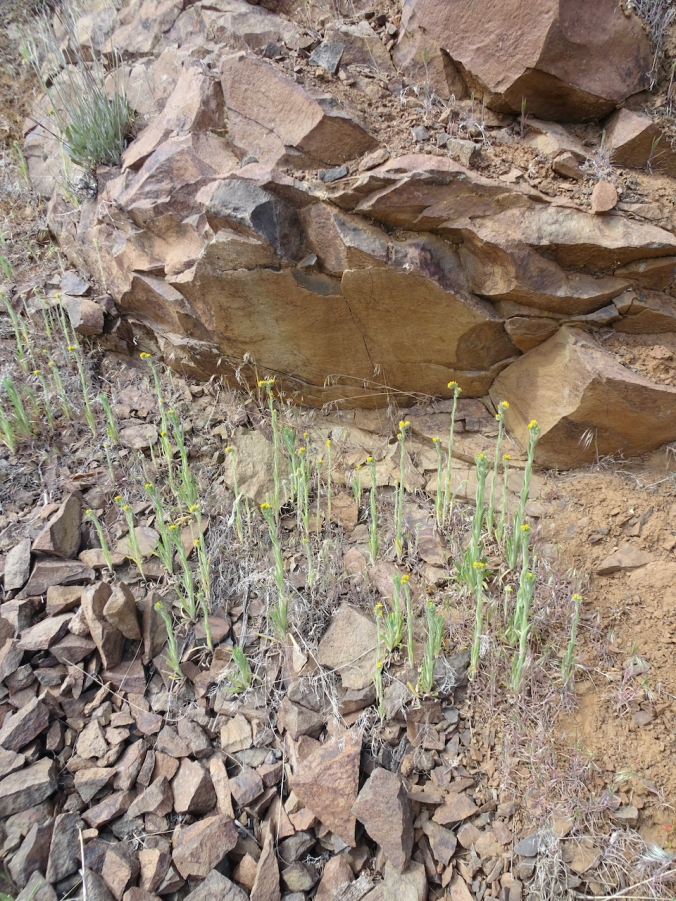 Down by the river we had a bit of a wind shelter. Quiet today, but in summer people come to swim. We walked a ways down stream to see the third tier of the falls, the smoothed rocky shelves with potholes, now exposed, and smooth, sandy banks. 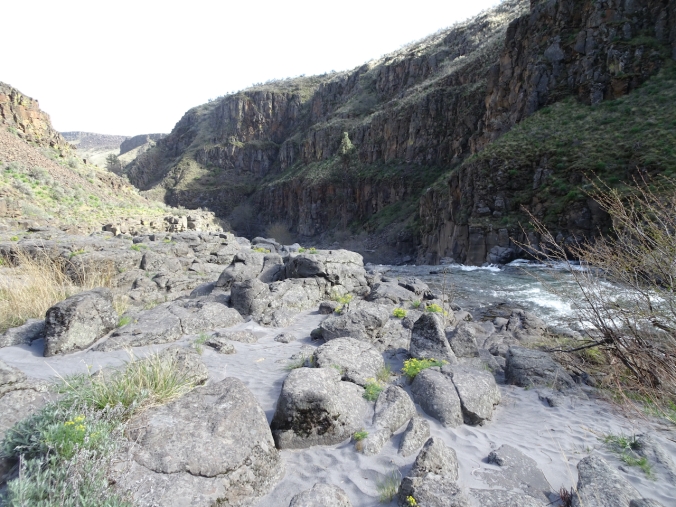 Sandy beach above the lower falls.

Downstream along the White River.

We walked back up to the rim, past the ruins of the powerhouse and almost post-apocalyptic scenery.

More of the ruins of the old power plant.

From White River Falls, we drove east across the Deschutes River on our way to Moro, along a long, smoothly curved road on the Warm Springs Reservation. Balsamrooot blooms were sprinkled on cliffs above the canyon. 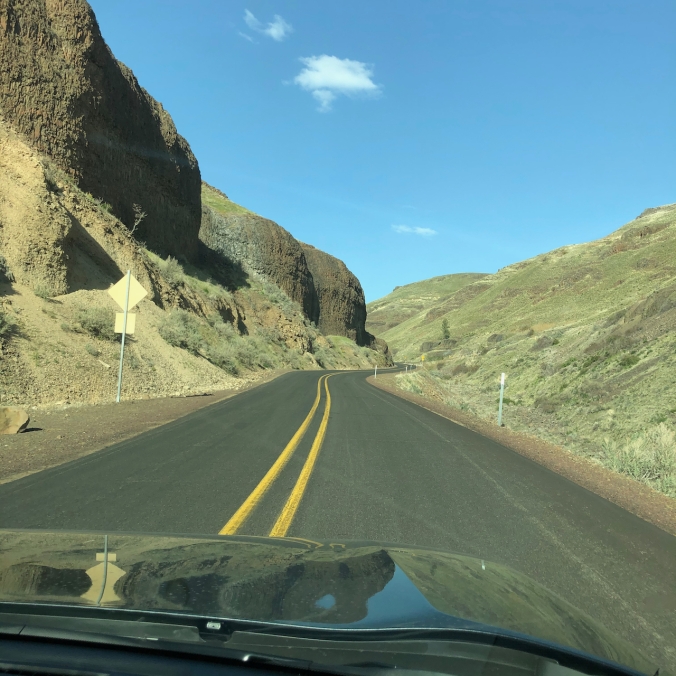 We passed sagebrush uplands and cultivated green fields, a 360 degree horizon punctuated by white windmills gleaming in the afternoon light.

Many white wind turbines on the horizon.

We drove across the uplands between the John Day and Deschutes Rivers on a beautiful clear blue morning.  Mt Hood, Mt Adams and Mt Rainier were on the horizon, and more windmills. 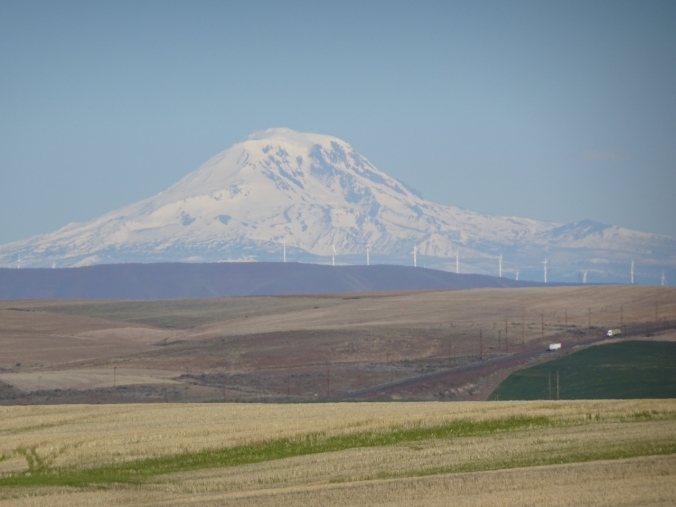 The Lost Coral Trail in Cottonwood Canyon State Park is 9.6 miles out and back. The trail follows an old road along the John Day River, sometimes beneath river-cut cliffs, sometimes across the point bars, as the wide blue river sweeps down stream. 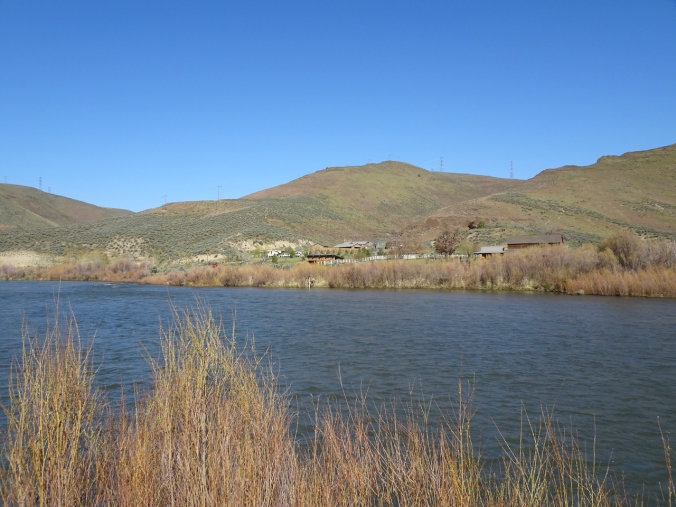 Cottonwood Canyon campground across the river.

Continuing along the river, the slopes were speckled with wildflowers; willows on the bars and a few trees were beginning to leaf out. 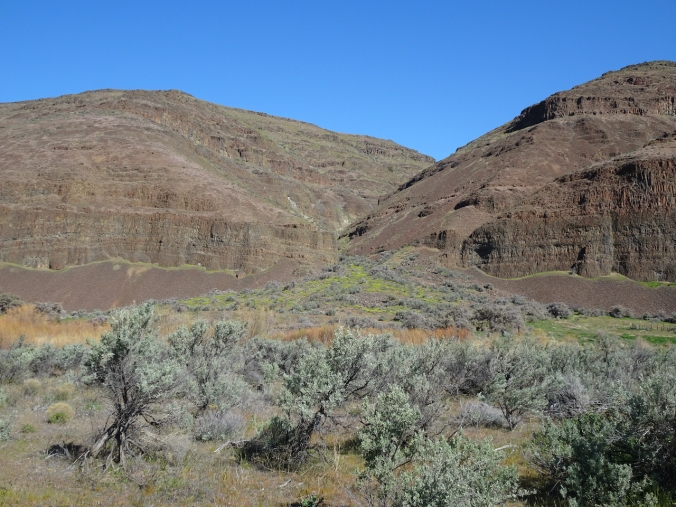 Flowering alluvial fan across the river.

Cliffs and reflections, serviceberry in bloom.

A welcome bench for rest and contemplation.

At our turnaround point, we found a phlox-covered slope and beautiful views of the river. We saw three equestrians – our only other people on the trail today. 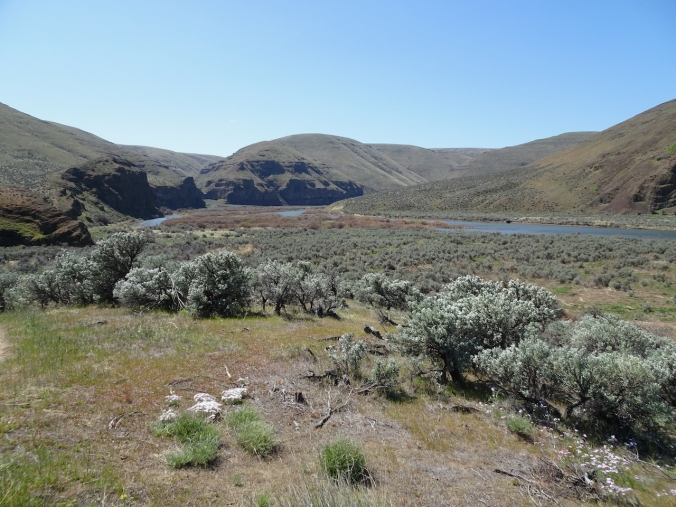 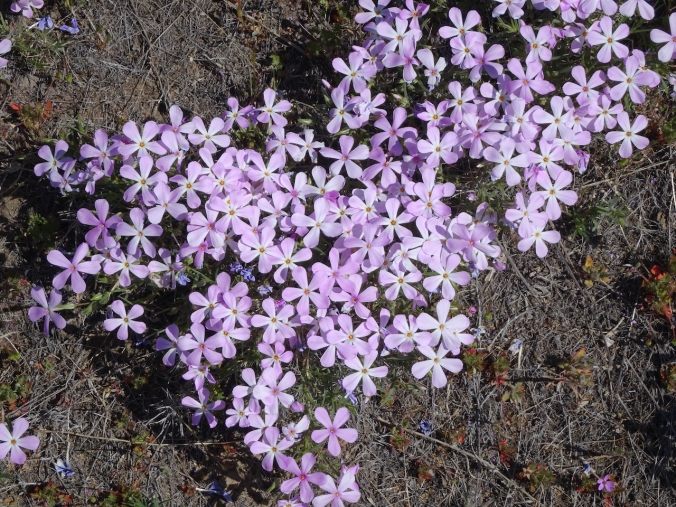 We retraced our steps upstream after lunch, admiring the views along the river in the changing light.

Many colors along the river.

Grassy tufts in the river.

Back under the cliffs near the trailhead.

I don’t know if I still love the desert as much as I used to. The rocky, prickly, isolation of it has caught up with my age. Dust and wind, and there must be snakes around somewhere …I just don’t know…

We drove back across the windmilled uplands, in view of the three mountains on the skyline, all the while watching the painted slopes of the cliffs and hills on the north side of the Columbia River. Distinct patches of yellow, white, and purple across the green and brown indicate the slopes are blooming with the wildflowers that we are going to see.

Looking at the Columbia Hills in Washington from Oregon.

We hiked the Ranch Loop clockwise from the Dalles Mountain Ranch Trailhead – we have been here before, most recently in February, when only the early flowers were on view. Today there were so many flowers out – gold balsamroot, purple lupine, pale pink phlox, and always the yellow parsley and pink filagree creating a pastel underglaze on almost every slope.

Mt Hood and ranch buildings from near the trailhead.

The “one tree”, still no leaves, with a flowery background

Balsamroot all the way down to the Columbia River. 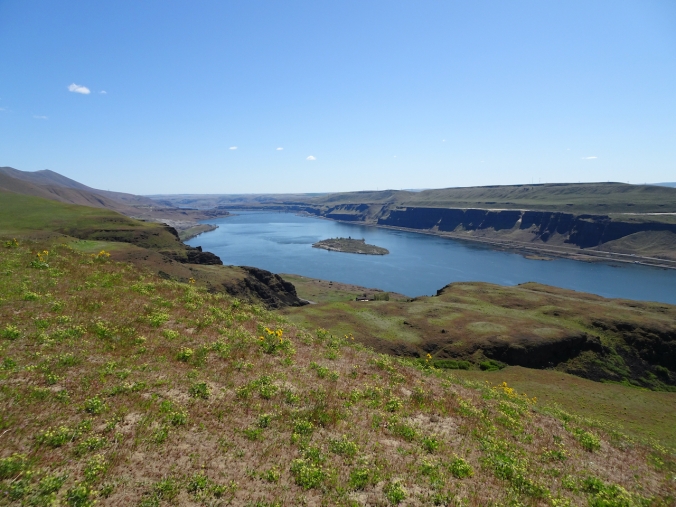 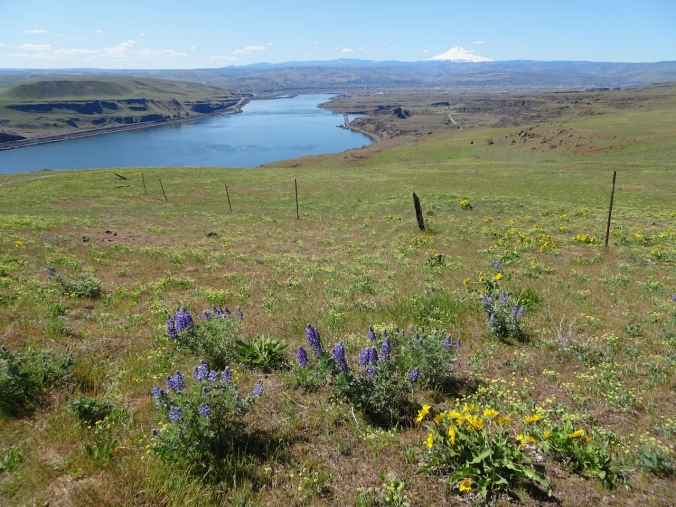 Lupine and western view from the high point on the lower trail. 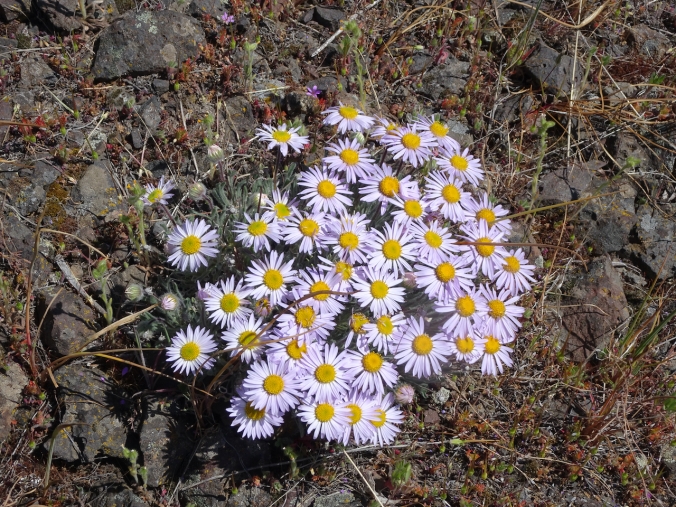 Lunch view – in February this area was covered in purple grass widows. 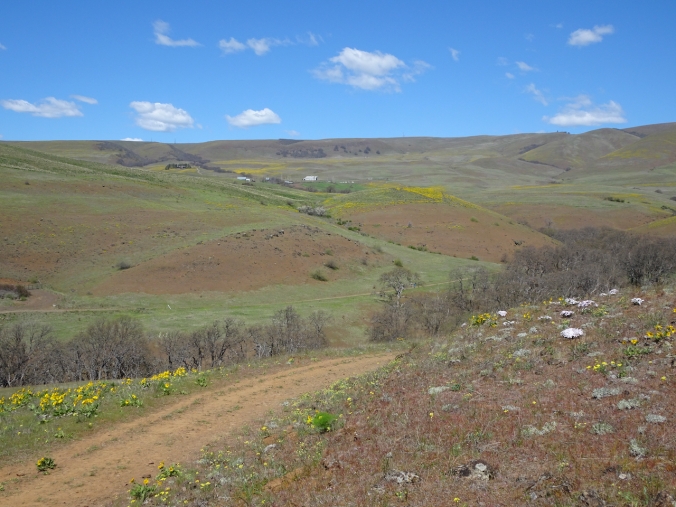 Back up Eight Mile Creek to the ranch.

We finally spotted the old car that is so often photographed among the flowers at the ranch.

We enjoyed this hiking trip, a chance to get out of town and enjoy the spring flowers at a couple of new locations.